Megan Fox, Machine Gun Kelly Open Up About Struggles in Their Relationship, Says ‘It’s Ecstasy and Agony for Sure’

Both Kelly and Fox have children from previous relationships. Fox is mom to three sons Noah, Bodhi, and Journey, whom she shares with her ex-husband, Brian Austin Green. Kelly has one child, his daughter Casie. 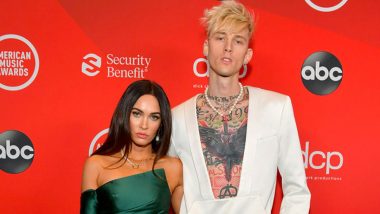 Megan Fox and Machine Gun Kelly's relationship might look all perfect, but the couple has admitted that they have their own struggles. According to People magazine, Kelly and Fox recently spoke to British GQ Style for the magazine's Autumn/Winter 2021 issue, which they posed for in their first cover photoshoot as a couple. The two cover stars opened up about their very public relationship, sharing details of what people don't always see in their photographs and red carpet appearances. Megan Fox Says She Knew Machine Gun Kelly Was Her 'Soul Mate'.

"It should be light, but also we go to hell with each other," Kelly said of his relationship with Fox, adding, "It's ecstasy and agony for sure... I don't want people to think anything's perfect with us. I didn't say it was the darkest fairy tale for no reason." The celebrity duo, who first met on the set of their film 'Midnight in the Switchgrass', have been dating since May 2020 and made their relationship public with their November red carpet debut later that year. Megan Fox Sparks Engagement Rumours with Beau Machine Gun Kelly.

Fox told the magazine that when she first met Kelly, she wasn't expecting to meet her "soulmate." She recalled, "I was definitely open to love, but I did not anticipate walking right into my soulmate like that. I was obviously over the way I had been living, and those paths lined up, those doors opened. It was as if all the obstacles that had kept us apart all those years had been removed and we were able to finally intersect."

Kelly and Fox, have previously talked about their very first meeting, with the latter telling a news outlet in July that she only worked on 'Midnight in the Switchgrass' with Kelly for two days, but she still established a "magical" connection with him. "The first time I looked into his eyes, I was like, 'I know you. I have known you so many times, in so many different forms, in so many different lives,' " she said, adding that she "wasn't expecting it'd be like, 'God, you are my soulmate,' instantly."

As per People magazine, Kelly earlier had said his relationship with Fox made him "a better person," and told 'The Howard Stern Show' he fell in love "for the first time" while dating the 'Jennifer's Body' actor. Both Kelly and Fox have children from previous relationships. Fox is mom to three sons Noah, Bodhi, and Journey, whom she shares with her ex-husband, Brian Austin Green. Kelly has one child, his daughter Casie.