Get latest articles and stories on Sports at LatestLY. She clocked 8:57.19 in the women's 3000 m event, surpassing the national record set by Loganathan, who had clocked 9:04.5 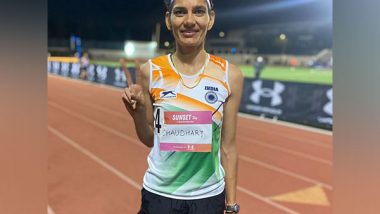 Los Angeles [US], July 3 (ANI): Athlete Parul Chaudhary has set a new national record in the women's 3000 metres event at the Sunset Tour in Los Angeles, surpassing the six-year-old record of Suriya Loganathan.

She clocked 8:57.19 in the women's 3000 m event, surpassing the national record set by Loganathan, who had clocked 9:04.5. Chaudhary was trailing at the fifth spot but gained momentum during the last two laps to earn a third-place finish at the podium.

"#NationalRecord Alert #ParulChaudhary clocked 8:57.19 in women's 3000m at Sunset Tour, LA to set the New NR by breaking the 6-yr old NR (9:04.5) of Suriya Loganathan She was trailing at 5th spot but gained momentum in last 2 laps to finish 3rd on the podium #Athletics," tweeted SAI Media.

Chaudhary's performance comes as a big boost ahead of World Championships, which will be held in Oregon from July 15 to July 24, where she will be competing in the 3000 m steeplechase event.

"Her performance will be a big boost ahead of the World Championships @WCHoregon22(3000m steeplechase is her main event) Many congratulations #IndianSports #Athletics," tweeted SAI Media.

"Congratulations to Parul Chaudhary for breaking the 6-yr old NR & setting the new National Record in women's 3000m with a time of 8:57.19 at Sunset Tour, LA! 1st Indian athlete to clock a sub-9 minute time in W-3000m," tweeted Thakur. (ANI)