Cristiano Ronaldo has reportedly urged United to let him leave the club should any good offer arrive. Following the news of Ronaldo's possible departure, Manchester United legend Garry Neville engaged in an argument with Liverpool's Jamie Carragher, with the latter taking a jibe at Ronaldo's arrival at Old Trafford last year after linking with Man City move. 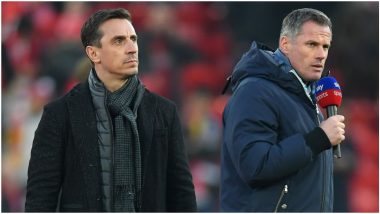 Garry Neville and Jamie Carragher have engaged in a war of words on Twitter on Saturday after reports of Cristiano Ronaldo's request to Manchester United's team management for a potential departure this summer. The Red Devils' talisman Ronaldo has expressed his desire to leave the English club after a disastrous 2021-22 season for the Red Devils which saw United throw away their chance to book spot in UEFA Champions League.

According to The Times, the five-time Ballon D'Or winner has lodged a transfer request to United because he is unhappy at the club. Ronaldo wanted a squad overhaul at Old Trafford to fight for every possible trophy in the next season. But, somehow, United management have been inactive in the transfer market so far, with not being able to land any big signing this summer. The Portuguese star, who has a winning mentality and wants more from his teammates, wants a way out of Manchester-based club as soon as possible.  Cristiano Ronaldo Transfer News: Manchester United Have no Intention to Sell The Portuguese Ace This Summer

Ronaldo has also informed Manchester United that he be allowed to leave if any suitable offer arrives from any top club in this summer window. However, club sources confirm that United do not want to part their ways with the all-time top goalscorer this summer. Coach Erik Ten Hag has reportedly asked United managing board not to sale Cr7 as the 37-year-old forward is an important part of his 2022-23 project at Old Trafford.

Following this news, Manchester United legend Garry Neville engaged in an argument with Liverpool's Jamie Carragher, with the latter taking a jibe at Ronaldo's arrival at Old Trafford  last year after linking with Man City move.

The former Red took to Twitter and wrote: "Ronaldo did exactly what I thought he would do, score goals but make the team worse. The transfer request also kills the idea he turned down Man City because of his love for Man United."

Neville did not sit back after Carragher's banter and gave a befitting reply, explaining that Ronaldo's move to United was for his love for the club and his potential departure would not be linked with his City transfer link last summer.  Cristiano Ronaldo Transfer News: Portugal Star Tells Manchester United He Wants To Leave

The former Red Devil replied: "I get it, you're full of yourselves but he can turn down City for United because he likes them more and still want to leave this summer. He left before but still loved the club. Enjoy Saturday night and your short period of success."

Carragher, who has always been in the limelight for his critical comments on big players such as Cristiano Ronaldo and Lionel Messi, called Neville 'a clown' for his Twitter reply and poked fun at the United icon's excitement about Cr7's arrival.

"City didn't want him you [clown] and you're the same fella who kept saying it was like Elvis had arrived in Manchester. Elvis has left the building," he continued. Neville replied: "Little less conversation."  Frenkie De Jong Transfer: Amid Manchester United's Interest, Barcelona President Joan Laporta Doesn't Want to Sell the Dutch Midfielder

However, it remains to be seen whether the Portuguese talisman will play for Manchester United next season or he will leave the club as per his transfer request this summer. Ronaldo has been heavily linked with a possible transfer link with Chelsea after his agent Jorge Mendes had a meeting with the Blues' owner Todd Boehly. Bayern Munich, Sporting Lisbon, Napoli and Roma are among other clubs who are currently monitoring the situation of the 37-year-old legendary footballer for a potential summer move.

(The above story first appeared on LatestLY on Jul 03, 2022 04:47 PM IST. For more news and updates on politics, world, sports, entertainment and lifestyle, log on to our website latestly.com).