Young Indian wrestler Jaskaran Singh settled for a silver medal while Chirag and Jaideep grabbed a bronze each in the ongoing 2021 World Cadet Wrestling Championship here at Budapest on Wednesday. 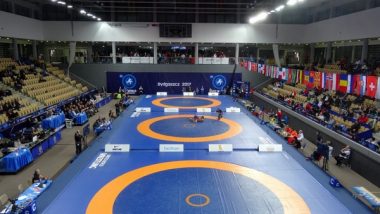 Jaskaran lost 2-6 against Uzbekistan's Kamronbek Kadamov in the 60kg final. Chirag bagged the bronze in the 51kg category after defeating Azerbaijan's Elman Mammadov by 9-6.

Apart from it, the qualification rounds in Women Wrestling were also played on Wednesday in 5 weight categories and the following wrestlers performed excellently and will fight for medal on Thursday: 43 Kg. Tannu - for Gold Medal, 73 kg. Priya - for Gold Medal and 65 kg. Varsha - for Bronze Medal.

The qualification round in the remaining 5 weight categories of Women will also be played on Thursday. (ANI)