Get latest articles and stories on Sports at LatestLY. The India Women's Hockey Team on Sunday travelled to Oman for the upcoming Women's Hockey Asia Cup which is set to take place from January 21-28 at the Sultan Qaboos Sports Complex in Muscat. 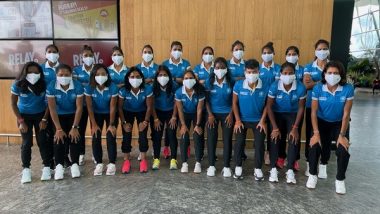 Muscat [Oman], January 17 (ANI): The India Women's Hockey Team on Sunday travelled to Oman for the upcoming Women's Hockey Asia Cup which is set to take place from January 21-28 at the Sultan Qaboos Sports Complex in Muscat.

With strong teams like China, Indonesia, Japan, Malaysia, Singapore, South Korea and Thailand taking part in the tournament, Team India will have the challenging task of defending the Title in Oman.

Deep Grace Ekka, who will be leading the team as the Vice-Captain, highlighted the importance of the tournament and gave a brief description of the team's preparations.

"It is sort of a new start for us. This will be our first full tournament after the Tokyo Olympics as unfortunately, we could only play one game in Korea at the Women's Asian Champions Trophy 2021. We held a training camp at the Sports Authority of India in Bengaluru after our return and have been able to work on several aspects of our game in attack and in defence. We are really pumped up to defend our Title at the Women's Hockey Asia Cup," Ekka said in a Hockey India release.

The top four teams from the tournament will qualify for the 2022 FIH Women's Hockey World Cup to be held in Spain and Netherlands.

With FIH Pro League matches and Asian Games also scheduled to take place in 2022, Ekka believes that the tournament can set the momentum for the team.

"It is important for us to perform well in the tournament as it will set the momentum for us for the upcoming challenges in 2022. It is a packed year for us, and the more games we play, the more we will be able to test ourselves and what we have been working on the training grounds," she said.

In 2018, India also went on to win the Silver medal at the Asian Games. Ekka believes that successful Title defence in Muscat can once again be the start of Team India's road to a successful year.

"Winning the Women's Hockey Asia Cup trophy in 2017 was a turning point for us and it really gave us the confidence that we can perform on the big stage if we play as a team. Winning the trophy once again can really motivate our players to perform even better this year and have an unforgettable 2022. It is very important for us to have a positive start," she said.

Ekka also highlighted her role in the team as a senior player in the defence and the Vice-Captain of the team. "When you are a senior player, you not only have to ensure that you give your 100 per cent at all times, but also motivate everyone else to do the same."

"I take this responsibility of being the Vice-Captain very seriously, and at any point in the game, I am required to contribute, I will do so. It is integral to remain tight in defence, and I will continue to communicate with others in the defence line as and when we need to change our tactics or formation on the field, depending on the situation in a match," she signed off. (ANI)