Spanish teenager and last year's US Open quarterfinalist Carlos Alcaraz lived up to his status as a first-time Grand Slam seed as the world No. 31 scored a 6-2, 6-2, 6-3 win over Chilean qualifier Alejando Tabilo on Day One of the Australian Open here on Monday. 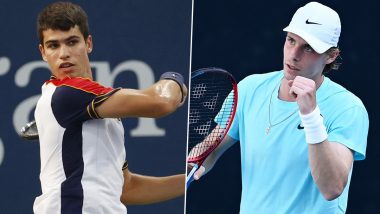 Melbourne, Jan 17: Spanish teenager and last year's US Open quarterfinalist Carlos Alcaraz lived up to his status as a first-time Grand Slam seed as the world No. 31 scored a 6-2, 6-2, 6-3 win over Chilean qualifier Alejando Tabilo on Day One of the Australian Open here on Monday.

The 18-year-old Alcaraz's first serves proved too much for the 24-year-old Tabilo, who was making his second Grand Slam main-draw appearance, as the Spaniard put his game on full display after an offseason spent on improving his skills.

"I felt really good," said Alcaraz after the match. "I didn't expect that this first match was going to be really good for me. I played a great level the first match of the season. Really good feelings… hope the next matches are going to be the same." Australian Open 2022: Rafael Nadal Advances to Second Round With Straight Sets Victory Over Marcos Giron.

With Alcaraz at No. 31 and Tabilo at No. 135, it was never going to be an easy job for the latter and the gap in the rankings showed as the Spaniard advanced comfortably after the pair traded early breaks.

Alcaraz went on a six-game winning streak to wrestle away control. The Spaniard built his opening-round game on intense aggression from the baseline, but he also deftly mixed well-placed returns in building the lead.

Alcaraz faced just one break point in the match, while breaking seven times in 16 chances of his own.

"I'm starting to get more comfortable on hard court than on clay courts," said Alcaraz. "I think the most tournaments of the year are on hard court, so you have to be ready."

Alcaraz enters the new year on the heels of a breakout year that also saw him reach the US Open quarterfinals, win his first ATP title (Umag) and break into the ATP's top-40 for the first time. Alcaraz had started the 2021 season inside the top-150.

This season, his goals include reaching the top-15 and playing in the Nitto ATP Finals.

"It's a really good goal for me, but so difficult as well," he said.

With the top quarter of the Australian Open draw now missing world No. 1 Novak Djokovic, Alcaraz will take on Dusan Lajovic of Serbia, who defeated Marton Fucsovics of Hungary 6-3, 4-6, 6-1, 6-7(6), 6-1. One step further, No. 7 seed from Italy Matteo Berrettini looms as a potential third-round opponent.

Less than a fortnight after helping Canada win the ATP Cup, Denis Shapovalov survived a first-round matchup against Croatia's Laslo Djere. After being two points away from a fifth set, the Canadian advanced in four, 7-6(3), 6-4, 3-6, 7-6(3). Djere had an opportunity to serve for both the first and fourth sets, but each time the No. 14 Canadian seed denied him.

"I felt like the fourth set was slipping away from me after that set point," Shapovalov said in his on-court interview. "But I'm very happy with the outcome.

"He did a great dob to come back from two sets to none," Shapovalov was quoted as saying by atptour.com. "He changed his tactics, tried to go for it more and was very tricky."

(The above story first appeared on LatestLY on Jan 17, 2022 02:00 PM IST. For more news and updates on politics, world, sports, entertainment and lifestyle, log on to our website latestly.com).