Sports News | IPL 2021: When Jadeja Plays Like That, There's Not Much You Can Do, Says Eoin Morgan

Kolkata Knight Riders (KKR) captain Eoin Morgan was all praise for Ravindra Jadeja after CSK batter single-handedly took the game away from KKR in their Indian Premier League encounter at the Sheikh Zayed Stadium on Sunday. 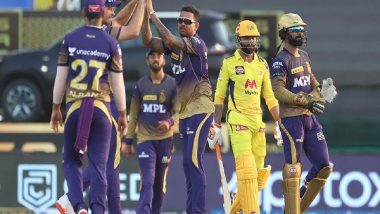 The two-wicket win sees Chennai Super Kings (CSK) return to the top of the table. Needing 26 off the last two overs, CSK took two singles of the first two balls off Prasidh's over before Jadeja went berserk. He hit a six over the long leg, followed it with a straight six, then a square drive for a boundary and then one at third man. By the time the 19th over ended, CSK needed just 4 more runs to make it three consecutive wins.

While Narine did pick two wickets in the 20th over -- Sam Curran and Jadeja -- but it just wasn't enough at the end of the day as Jadeja had already done the damage in the previous over. In the end, he finished with 22 off 8 balls.

Eoin Morgan, the KKR captain during the post-match presentation said: "First and foremost, it was a hell of a game to be part of. Both sides played exceptionally well. CSK managed to get over the line. I don't think I can fault anything from the guys today. They fought hard on a hot day. Unfortunately, it wasn't ours."

"There have been a lot of positives from our side in the second half of the tournament, so I think just take the positives from today.. that is to be in the game like we did today to give us the best chance of winning the game."

"Difficult to say (If he would have bowled Russell/Narine for the 19th if the former was on the field). In that situation you need wickets. Sunil is a great option. So is Dre (Russell). We hope he is okay. But Sunil takes on that responsibility with every franchise he goes to. So no better man really," he pointed.

"The whole tournament there has been an abundance of top-class international players. Some of the Indian uncapped players too have the promise to go on even play international cricket. But when Jadeja plays like that - similar to how Sam Curran plays in the England team - there's not much you can do," he added.

"It all has to do with matchups, guys coming in (about bowling his mystery spinners early vs MI and holding them back today). For you to have the privilege of holding them back, the bowlers before have to bowl well. I think today it worked pretty well," the Englishman said. (ANI)