Get latest articles and stories on Sports at LatestLY. After a thrilling win over Lucknow Super Giants in the Indian Premier League (IPL) Eliminator, Royal Challengers Bangalore captain Faf du Plessis was 'over the moon' and went on all praise for centurion Rajat Patidar for his outstanding performance against LSG. 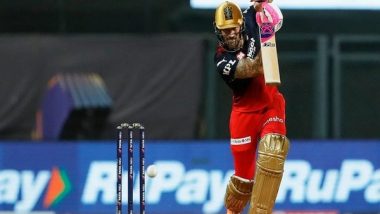 Kolkata (West Bengal) [India], May 26 (ANI): After a thrilling win over Lucknow Super Giants in the Indian Premier League (IPL) Eliminator, Royal Challengers Bangalore captain Faf du Plessis was 'over the moon' and went on all praise for centurion Rajat Patidar for his outstanding performance against LSG.

Rajat Patidar starred for Royal Challengers Bangalore as they defeated Lucknow Super Giants by 14 runs in the Eliminator clash of IPL 2022 here at Eden Gardens in Kolkata on Wednesday.

Batting first, an unbeaten century by Rajat Patidar (112*) and his 92-run stand with wicketkeeper batter Dinesh Karthik powered Royal Challengers Bangalore to a massive 207/4 in their 20 overs against IPL debutants Lucknow Super Giants.

"Today was a special day. The guys put in a special performance. Over the moon. For a young guy to play as he did. The way he celebrated also tells you he has a good head on his shoulders. His hundred was one of the best I have seen in the IPL," said Faf du Plessis in a post-match presentation.

Patidar got the fastest century by an uncapped player in the history of the tournament. He hit his ton in 49 balls and finished the innings with a score of 112 off 54 balls.

"Our bowlers were clear and calm and that was good. He has got all the shots. Every single time he attacks, he transfers the pressure back on the opposition. It is important to celebrate this despite something big coming up," said du Plessis.

RCB skipper reserved special praise for one of the stars of RCB's win Harshal Patel, saying the young bowler was the joker in the team and always delivers in every pressure situation. When the match was in its crucial stage LSG needed 24 from 6, Harshal Patel held his nerves to see through RCB across the finishing line.

"We were very happy as a group. As a group, we needed some calm presence. We didn't feel like it was a big game. Everyone was calm and relaxed. Harshal is the joker in the pack. A special card I can pick. He bowls the important overs. The second last one over from him changed the game for us," he added.

With this win, RCB will play against Rajasthan Royals in Qualifier 2 at Narendra Modi Stadium, Ahemdabad on Friday for a place in the final against Gujarat Titans. (ANI)