Pakistan Cricket Board (PCB) on Thursday confirmed that Mohammad Amir has joined the men's squad in Derbyshire after clearing both his Covid-19 tests. 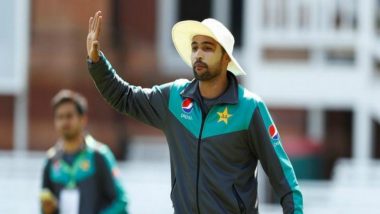 Derbyshire, July 30: Pakistan Cricket Board (PCB) on Thursday confirmed that Mohammad Amir has joined the men's squad in Derbyshire after clearing both his Covid-19 tests. Amir had left for England from Lahore on 24 July and, as per the UK government's guidelines, was in isolation for a period of five days during which he was tested twice.

The board has also confirmed that fast bowler Haris Rauf cleared his second Covid-19 test and is now eligible to join the squad in England. As per the protocols he was tested twice - Monday and Wednesday. Rauf had earlier tested positive for Coronavirus five times. And now finally he has tested negative. "He (Rauf) is now expected to travel over the weekend," PCB said in an official release. England vs Pakistan 1st Test 2020: Hosts Name Unchanged Squad for Series Opener.

In September 2019, Riaz had taken an indefinite break from red-ball cricket to focus on the shortest format of the game. Now, he has returned to Pakistan's Test squad.

Meanwhile, the remaining nine players - Fakhar Zaman, Haider Ali, Iftikhar Ahmed, Imad Wasim, Khushdil Shah, Mohammad Hafeez, Mohammad Amir, Mohammad Hasnain, and Musa Khan - will continue to train with the squad for the T20I series, which will be played after the Test series.

Pakistan and England are slated to play three Tests and three T20Is against each other. The first Test of the series is to be played from August 5 at Manchester. The three-match Test series will be a part of the World Test Championship (WTC).