Get latest articles and stories on Sports at LatestLY. Ousmane Dembele has fired back at FC Barcelona after the club's director of football Mateu Alemany told the striker to leave the La Liga club immediately on Thursday. 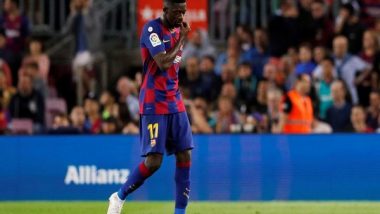 Barcelona [Spain], January 21 (ANI): Ousmane Dembele has fired back at FC Barcelona after the club's director of football Mateu Alemany told the striker to leave the La Liga club immediately on Thursday.

The 24-year-old who was dropped from Barcelona's squad for their meeting with Athletic Club in the Copa del Rey has described attempts to force his exit as "blackmail".

The contract of Fench winger expires in the summer and talks over a new deal have broken down. After which, Alemany on Thursday morning said "it seems obvious to us that the player does not want to continue at Barcelona" and "therefore we hope that a transfer will take place before January 31".

Referring to the "gossip" surrounding him, Dembele on his Instagram wrote: "I forbid anyone to speak in my place, in place of my agent, who I have complete confidence in. I am still under contract. I am fully at the disposal of my club and my coach."

"I am not a man who cheats and even less a man who has a habit of giving in to blackmail. Surely, love is a kind of blackmail. There are negotiations. I let my agent handle it, it is his turf."

"My field is football, simply playing football, sharing moments of joy with my team-mates, our supporters. Let's focus on the essentials - winning," he added.

Dembele has spent the last four-and-a-half seasons at Camp Nou, having initially joined the club from Borussia Dortmund for EUR145 million (£121m/$164m) in 2017, but now only has six months left to run on his contract. (ANI)