Former Bangladesh skipper Shakib Al Hasan has issued an apology for venting out his frustration on the umpire during a match in Dhaka Premier League (DPL). 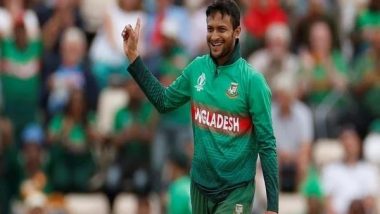 Dhaka [Bangladesh], June 11 (ANI): Former Bangladesh skipper Shakib Al Hasan has issued an apology for venting out his frustration on the umpire during a match in Dhaka Premier League (DPL).

In the match on Friday, Shakib first kicked the stumps and later uprooted them after arguing with the umpire about decisions that didn't go in his team's favour.

The incident's video went viral on social media and many fans condemned Shakib's behaviour where he was seen lashing out at the umpire.

The star all-rounder also got into a war of words with Bangladesh Cricket Board (BCB) director Khaled Mahmud.

Shakib, the skipper of Mohammedan Sporting Club, after the match, apologised for his questionable behavior.

"Dear fans and followers, I am extremely sorry for losing my temper and ruining the match for everyone and especially those who are watching from home," Shakib said in an official statement.

"An experienced player like me should not have reacted that way but sometimes against all odds it happens, unfortunately. I apologise to the teams, management, tournament officials and organizing committee for this human error. Hopefully, I won't be repeating this again in the future. Thanks and love you all," he added.