Tokyo Olympics which was declared 'open' on Friday with a toned-down Opening Ceremony, will see the spotlight shift to sporting activities and the second day of the Games -- July 24-- is one of the biggest for the Indian contingent. 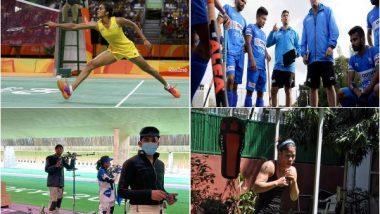 New Delhi [India], July 23 (ANI): Tokyo Olympics which was declared 'open' on Friday with a toned-down Opening Ceremony, will see the spotlight shift to sporting activities and the second day of the Games -- July 24-- is one of the biggest for the Indian contingent.

Saturday can indeed prove to be one of the most rewarding days for the county at the Olympics. The day possibly holds the prospect of winning six medals.

Mirabai Chanu who is the sole Indian representative in weightlifting will kickstart her campaign on Saturday. Competing in the 49kg category, her real challenge lies in China's Zhihui Hou, but looking at the recent form of the Manipur-based lifter, it is safe to say that Chanu can indeed come back with a medal.

The mixed pair competition of archery will also get underway on Saturday and after the ranking matches on Friday, Pravin Jadhav and Deepika Kumari would be paired alongside each other. Deepika might have practised with Atanu Das heading into the tournament, but who knows the pair of Deepika and Pravin might just emerge as the darkhorse.

The qualification matches will kickstart at 6 am on Saturday and it will be followed by the medal matches at 10:45 am.

Saurabh Chaudhary is someone who everyone has put their money on to bring back gold in the men's 10m air pistol event. South Korea's Jin Jong-Oh is expected to be a thorn in Chaudhary's way, but looking at the recent form, it is safe to expect the Indian youngster to emerge as the winner of gold.

On Saturday, shuttler Sai Praneeth will start his men's singles campaign while the doubles pair of Chirag Shetty and Satwiksairaj Rankireddy will also open their campaign. The matches will showcase the form these three shuttlers have been in, and one will be able to gauge how far the badminton contingent can go in the Games.

Both men's and women's hockey teams will start their bid to win gold at the Games on Saturday. While the women's team clashes against the formidable Netherlands, the men's lock horns against darkhorse New Zealand.

India will also make its presence felt in tennis, judo and rowing on Saturday, hence the very second day of the Games will help the fans gauge whether the nation can come back with medals in double digits or not. (ANI)