Gary Woodland held a slender one shot lead going into the final round of the Hero World Challenge while tournament host Tiger Woods remained in the hunt for his first title here since 2011 as he moved to Tied-3rd. 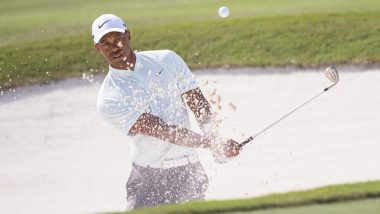 Nassau, December 7: Gary Woodland held a slender one shot lead going into the final round of the Hero World Challenge while tournament host Tiger Woods remained in the hunt for his first title here since 2011 as he moved to Tied-3rd.

Reigning US Open champion regained the lead with a four-under 68 in the third round here on Friday, displacing fellow American Patrick Reed from the top.

Reed was handed a two-shot penalty after he was found moving the sand away from his ball. However, all is not lost for Reed who tallied 74 in the third round but is only three shots of the leader.

An exciting finish is on the cards here with three shots separating the top six players. Henrik Stenson of Sweden would have shared the lead with Woodland going into the final day if it was not for a bogey on the par-4 18th hole.

Stenson, teeing up at his 50th event since his last win in 2017, was in a group ahead of Woodland. The Swede was five-under through 17 and leading at 13-under before the bogey on 18th dropped him to 12-under. Woodland came up next and birdied the same to sneak ahead to 13-under.

Woods for the second straight day equalled the day's best card at 67 – playing partner Justin Thomas had the other 67. He was 11-under through 54 holes and tied with Thomas (67) and Jon Rahm (69), who is trying to match Wood's feat of winning the Hero World Challenge in successive years.

For Woods, the 18th hole finally gave him some joy as he picked up a birdie after a bogey on the first day and a missed birdie on the second.

"My swing feels good. Since I've come back from my little knee procedure, I've swung the club well. I hit it well in Japan. I'm hitting it well here. I just need to make a few more putts.

"We have five par 5s and most of them are reachable even with some of the different winds. So it's certainly conceivable to shoot anywhere between seven and nine under par," said Woods, the 2019 Masters champion which was his first victory at a Major since 2008.

Woods, who leads United States in the President's Cup in Melbourne next week, said he could have been even better on Friday.

"Yeah, I'm going to have to make some birdies again tomorrow. The conditions, the forecast will be about the same as it was today, and same kind of wind, same basic direction, so the golf course can be had. You can see, I'm sure you're going to see a lot of good scores today," he said.

"You know, I know I shot 67, but I left a few out there today. I missed a bunch of putts. In order to win tomorrow, I'm going to have to make my share," said the 15-time Major winner.

Woods will play the final round with Thomas, the third time they will be teeing off together this week. He has never outscored Thomas in the 13 times they have played together.

Woodland, who makes his President's Cup debut next week, dropped only one shot and finished with a flourish. He knocked home a 30-foot putt on the par-3 17th and then with the wind at his back, he hit wedge to three feet for a closing birdie. The closing holes seemed to be suiting him well, as he had three straight birdies on the last three holes in the second round.