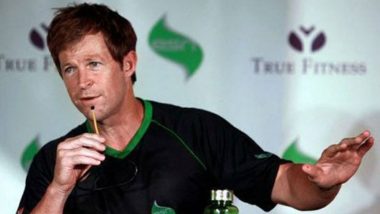 New Delhi, May 18: Former South Africa skipper Jonty Rhodes has picked Virat Kohli as the fittest cricketer going around currently. Rhodes was doing an Instagram live session with batsman Suresh Raina and it was then that both players decided to talk about the importance of staying fit for an athlete.

"We have to look to different physical requirements for different players, we need to see how often they get injured and how much they have improved their fitness. In that scenario, Virat Kohli's transformation from a chubby lad after realising the importance of fitness is unbelievable," Rhodes told Raina. Virat Kohli Once Again Trolls Yuzvendra Chahal As RCB Spinner Pops Up in Comments Section During Indian Cricket Team Captain's Instagram Live Session With Sunil Chhetri.

"Not only exercise but to look after his diet. He is the fittest right now in my opinion," he added. Kohli has become one of the most highly admired sportspersons in the country and it is a testament to his disciplined fitness routine.

During his initial days of international cricket, Kohli was fond of chicken which he has admitted several times during media interaction.But in 2013, the 31-year-old batsman intentionally shifted his focus to fitness, diet, and training.

Now he has become punctual about his diet which has given him a different character on and off the field. The comparisons between Kohli and Sachin Tendulkar have also kept on growing and many have picked the current Indian skipper to break the records set by Tendulkar. Virat Kohli’s Relentless & Fighting Nature a Great Example for Us, Says Shreyas Iyer.

Tendulkar managed to call time on his career after registering 100 international centuries, while Kohli currently has 70 centuries across all formats.Currently, Kohli is ranked at the top spot in the ICC ODI rankings while he is in the second place in Tests rankings.