Get latest articles and stories on World at LatestLY. Canada's Chief Public Health Officer Theresa Tam on Thursday confirmed a total of 278 cases of monkeypox in the country as of June 29. 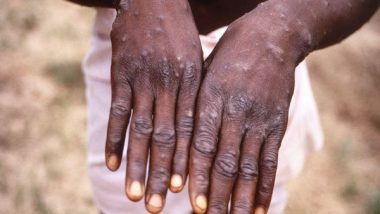 Ottawa [Canada], July 1 (ANI/Xinhua): Canada's Chief Public Health Officer Theresa Tam on Thursday confirmed a total of 278 cases of monkeypox in the country as of June 29.

The cases had been reported nationally, including four cases from British Columbia, five from Alberta, 67 from Ontario and 202 from Quebec, the top doctor said.

Also Read | Vladimir Putin Hits Back at G7 Leaders for Mocking His Athletic Exploits, Says It Would Be 'Disgusting' To See Boris Johnson 'Naked'.

Tam reiterated that the risk of exposure to the monkeypox virus is not exclusive to any group or setting.

Anyone, no matter their gender or sexual orientation, could get infected and spread the virus if they come into close contact with someone who has monkeypox or has direct contact with their personal or shared objects, including towels or bed linens, she warned.

According to Tam, the latest epidemiological data show that the majority of the cases are male and range between 20 and 69 years of age.

Monkeypox is a sylvatic zoonosis that may cause infections in humans and the disease usually occurs in forested parts of Central and West Africa. It is caused by the monkeypox virus which belongs to the orthopoxvirus family, according to the World Health Organization. (ANI/Xinhua)