Get latest articles and stories on World at LatestLY. Eight people were killed after a decorative building structure fell from a height of about 12 meters at 6:28 p.m. Saturday in north China's Hebei Province, local authorities said Sunday. 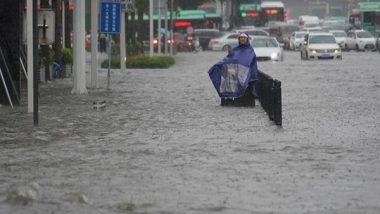 The incident happened during a rainstorm in Luquan District of Shijiazhuang, capital city of Hebei. Nine people sheltering from the rain were hit by the fallen structure. One person is currently hospitalized with stable vital signs, according to the district government, reported Xinhua.

The torrential rainfalls in China which started last Sunday have induced floods in several parts of the country including Southwest China's Chongqing Municipality and Qingdao in East China's Shandong Province.

As per the forecast, some of these areas can expect rainfall of up to 100-160 millimetres, as well as short-term heavy precipitation with hourly rainfall of 30-70 millimetres. Forecasts also mentioned the thunderstorm winds of magnitude 8-10 as well as hail, which may exceed magnitude 12 in certain areas.

The downpour has affected more than 60,000 people in Sichuan, where more than 42,000 people have already been evacuated as of 7 am Monday.

The torrential rains and rain-induced floods since May 28 have wreaked havoc in 80 counties of the province. As per the local authorities, in south China's Guangxi Zhuang Autonomous Region, more than 3.75 million residents have been affected by floods and heavy rains.

A total of 548,000 people were affected due to the heavy rain in China's Jiangxi province last Tuesday, according to the provincial flood control headquarters. According to East China's Jiangxi Province, Direct economic losses from the floods touched 470 million yuan (about 70.4 million US dollars).

Multiple low-lying areas in Chongqing are flooded across its 39 districts and counties with maximum rainfall reaching 213.5 m, Global Times reported.