Get latest articles and stories on World at LatestLY. Established in 1925, China's famed Palace Museum opened a branch in Hong Kong on Sunday, days after Chinese President Xi Jinping visited the former British colony on June 30. 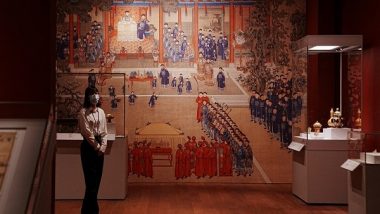 It has been done to showcase Chinese culture to influence HongnKongers as the city had witnessed unprecedented protests against China post national security was enforced in June 2020.

Under China's principle of "one country, two systems", Hong Kong initially retained its education system when it came under Chinese rule in 1997 and lacked the focus on mainland "national security" dedicated to building national identities and patriotism.

According to Chinese media, the Hong Kong Palace Museum (HKPM) is located in the West Kowloon Cultural District.

Over 900 treasures from the collection of the Palace Museum in Beijing are put on display on rotation at the opening exhibitions, Xinhua News reported, adding that some of the pieces are being shown in Hong Kong for the first time.

Xinhua reported that around 80 per cent of tickets for the first four weeks of the opening exhibitions have already been sold.

John Lee was sworn in as the sixth-term chief executive of Hong Kong, in the presence of Chinese President Xi Jinping, a move meant to signal that Beijing has the former British colony well under its control 25 years after taking over.

His oath was administered by Xi, who was here to attend the meeting celebrating the 25th anniversary of Hong Kong's return to the "motherland" and the inaugural ceremony of the sixth-term government of Hong Kong, Xinhua news agency reported.

Chinese premier arrived in a city vastly transformed from three years ago, when millions took to the streets in the biggest challenge to Beijing's rule in decades, reported New York Times (NYT).

"Hong Kong's 'true democracy' started after the handover. China has acted 'for the good of Hong Kong' and there is 'no reason at all to change' One Country, Two Systems," said Xi Jinping.

On 1 July, 1997, Hong Kong was handed over to the People's Republic of China (PRC) from the United Kingdom under the conditions set out in the 1984 Sino-British Joint Declaration. The Joint Declaration provides for fundamental rights, a high degree of autonomy and the "one country, two systems" in Hong Kong.

"25 years later, Hong Kong is no longer the city we once recognised," according to Inter-Parliamentary Alliance on China (IPAC). The draconian National Security Law, implemented on June 30, 2020, has been used to punish dissent, curtail protest and freedom of speech and reduce the city's autonomy.

Since the law's adoption, there have been at least 183 arrests made and 113 individuals charged, with more than 50 civil society organisations forced to disband and multiple media outlets ceasing to operate.

"Today we will also see John Lee, the city's new Chief Executive, take office. His selection by Beijing through its 'patriots-only' sham election shows how far Hong Kong's democracy has deteriorated since the advent of the National Security Law. Lee has promised to introduce new legislation to further tighten the PRC government's grip over Hong Kong," IPAC said.

IPAC called for governments around the world to work to hold China accountable under existing legal mechanisms. The group also called upon our governments to impose sanctions on Chief Executive John Lee, and other Chinese and Hong Kong government officials responsible for the erosion of freedom in the city.

"Our governments should also further scrutinise the export of dual-use goods and technologies that can be used for surveillance in Hong Kong and China, and ensure that products made by entities complicit in human rights abuses in Hong Kong and China do not enter our supply chains," IPAC said. (ANI)