Foreign Secretary Harsh Vardhan Shringla will embark on a two-day visit to the United Kingdom on Friday, the Ministry of External Affairs informed. 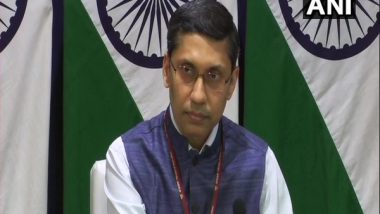 During his visit, the Foreign Secretary will meet with his counterparts and conduct a detailed review of bilateral relations with a focus on the implementation of Roadmap 2030, MEA spokesperson Arindam Bagchi said.

"Foreign Secretary Harsh Vardhan Shringla will visit the UK on July 23-24. During his visit, he will meet with his counterparts and conduct a detailed review of bilateral relations with a focus on the implementation of Roadmap 2030. He will also discuss regional, global issues," he said during a press conference here.

"Both the countries adopted an ambitious project 2030 to elevate bilateral ties to a comprehensive strategic partnership, Foreign Secretary will meet his counterparts to conduct a detailed review of bilateral relation between the countries," Bagchi said.

During the conference, the MEA spokesperson also informed about countries easing travel restrictions for India.

"We have been taking up with foreign countries the need to ease travel restrictions of Indians. We believe this easing will be an important step, Bagchi said. (ANI)