Get latest articles and stories on World at LatestLY. To prevent the Chinese takeover of Taiwan, New Zealand's Prime Minister Jacinda Ardern said that there are lessons to be learnt from the war in Ukraine for the Indo-Pacific adding that diplomacy and dialogue were the keys to preventing conflict. 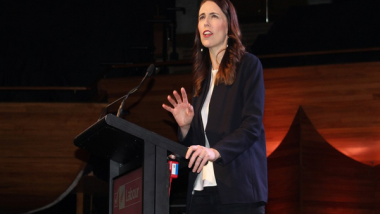 London [UK], July 3 (ANI): To prevent the Chinese takeover of Taiwan, New Zealand's Prime Minister Jacinda Ardern said that there are lessons to be learnt from the war in Ukraine for the Indo-Pacific adding that diplomacy and dialogue were the keys to preventing conflict.

She made these remarks while outlining her foreign policy approach to a policy think tank Chatham House in London, reported Sydney Morning Herald.

Prime Minister Ardern's comments echo sentiments similar to Australia and the UK where countries warned that Russia's invasion of Ukraine had a direct parallel with China's intentions for Taiwan. Ardern, like Australian Prime Minister Anthony Albanese, was invited to attend the NATO summit in Madrid.

New Zealand is an island country in the southwestern Pacific Ocean and her words hold significant weightage however she declined to reveal what her country would do if diplomacy failed to prevent a Chinese invasion of Taiwan.

Falling short on speaking on the steps the countries in the region should take against China, Ardern simply said that the lesson learnt from the invasion of Ukraine for the Indo-Pacific was that war is never the answer.

"Here [in the Indo-Pacific] I would be loathed to assume any particular trajectory, let's continue to make sure that we're using diplomacy at every turn to try and prevent conflict in our region or any region because if there's one lesson from the war in Ukraine, it's that wars are devastating and never the answer," she added.

"But equally, I think the message we want the world to take from the illegal and unjustified invasion of Ukraine is that there will be a response."

Apparently, the Prime Minister left the gathering guessing on what the "response" be.

When pressed by The Sydney Morning Herald and other media outlets present at the gathering on why this approach had failed to deter Russian President Vladimir Putin and if it would work with Chinese President Xi Jinping, Ardern said she was not the person to comment on what led to the invasion of Ukraine.

She also declined to state what New Zealand would do if her dialogue and diplomacy strategy failed and Xi invaded Taiwan.

"What I will continue to push for is that we never just simply make an assumption that nothing can be done ... and lead to nations -- not naming names -- being completely isolated because in a way, then, you create an inevitability.

She later added that militarisation was not required for the region to feel safe. (ANI)