Get latest articles and stories on World at LatestLY. The Philippines has installed the buoys and opened some command posts to assert its sovereignty in the waters and islands it claims in the contested South China Sea. 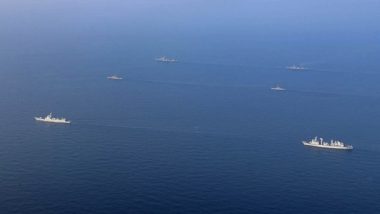 Manila [Philippines], May 22 (ANI): The Philippines has installed the buoys and opened some command posts to assert its sovereignty in the waters and islands it claims in the contested South China Sea.

The Philippine Coast Guard (PCG) had set up five navigational buoys, each one bearing the national flag from May 12 to 14, Admiral Artemio Abu, the service commandant said. Abu hailed "the resounding success of installing our sovereign markers."

Abu also noted that several Vietnamese and Chinese fishing boats had been spotted in the vicinity of Pag-asa Island, the largest Philippine-held territory that houses a Filipino civilian community.

"These [outposts] will optimize the strategic deployment of PCG assets by monitoring the movement of merchant ships in its surrounding waters and communicating maritime incidents to the PCG National Headquarters [in Manila]," he added.

Lauding the coast guard for its actions in asserting the sovereignty, the head of the Philippine Commission on Human Rights, Jacqueline Ann de Guia on Friday said, "No State should deprive our Filipino fisherfolk of carrying out their livelihood in our national territories. The installation of navigational buoys is a notice to the rest of the international community that the Philippines is asserting sovereignty over the Kalayaan Island Group."

A 2016 ruling by a tribunal of the Permanent Court of Arbitration affirmed Manila's sovereign rights to a 200 nautical mile exclusive economic zone and an extended continental shelf.

It also declared that Beijing's sweeping claim over the entire sea is invalid under international law but China rejected the ruling and continues to occupy the waters. (ANI)