Get latest articles and stories on World at LatestLY. Ukraine launched deliberate strikes with Tochka-U missiles and Tu-143 drones on residential areas of the Russian cities of Belgorod and Kursk, aiming at civilians, the Russian Defense Ministry said on Sunday. 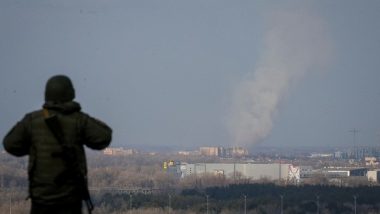 "Tonight from 03:00 to 03:30 Moscow time [00:00 to 00:30 GMT], the Kiev regime committed a deliberate strike with Tochka-U ballistic missiles with cluster ammunition and Tu-143 Reis drones on residential areas of Belgorod and Kursk, where there are no military facilities. This missile strike was purposefully planned and was carried out against the civilian population of Russian cities," the ministry told reporters.

According to the ministry, the Russian air defense destroyed two Tu-143 unmanned aerial vehicles filled with explosives on the approach to Kursk, and shot down all three Tochka-U missiles above Belgorod, but the wreckage of one missile fell on a residential building.

Earlier in the day, a Sputnik correspondent reported that loud popping sounds were heard in the city of Belgorod and surrounding areas, and that the pops were so strong that the windows in the houses trembled and car alarms went off.

Later in the day, the governor of Russia's Belgorod Region, Vyacheslav Gladkov, confirmed three fatalities in Belgorod and at least four injured people, including one child. In addition, 11 residential buildings and over 30 private houses were damaged, with five houses completely destroyed. (ANI/Sputnik)