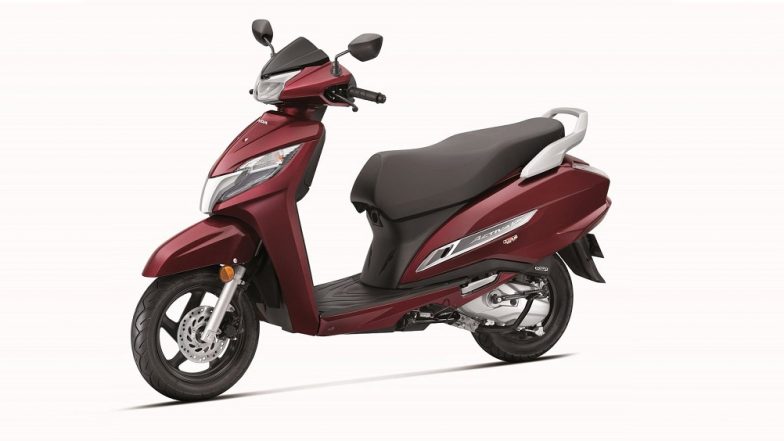 Honda Motorcycles and Scooters India (HSMI) is all set to launch the new Honda Activa 125 BS6 version of the scooter in India on September 11 at an event in New Delhi. As a reminder, the company unveiled the BS6 iteration of the Honda Activa 125 earlier this year in the month of June. Last week, the company officially rolled-out invites to media confirming the launch date for the new Activa 125 BS6 FI. It is important to note that the upcoming Activa will be the first BS6 ready scooter in India, which was revealed by brand ambassadors - Akshay Kumar and Taapsee Pannu. The launch of the new Activa is scheduled to happen in the presence of  Nitin Gadkari - Minister of Road Transport and Highways. Honda Activa 125 FI BS6 Scooter Launching in India on September 11; Key Specifications Leaked Online.

With Honda Activa launching this week in India, it will be the first BS6 two-wheeler in the country to be launched seven months before the new emission norms come into effect. Additionally, the Activa scooter is Honda's highest selling scooter in India. According to the market reports, the new Activa will get 26 new patents, wherein 11 patents are related with BS6 compliant engine itself.

The new Honda Activa 125 scooter will be powered by a 124.9cc Fuel-injected engine which will be tuned to produce maximum power of 8.52 PS @ 6,500 rpm against 10.54Nm of peak torque @ 5,000 rpm. The company also claims that the next-gen Activa will be more fuel efficient than the previous model. The 125cc scooter will also be equipped with Honda's PGM-FI Eco technology (HET), Enhanced Smart Power (eSP), Idling Stop System, silent start and fuel injection technology. Honda Activa 125 FI BS6 Scooter Unveiled in India: 5 Things To Know.

As far as the design is concerned, the Honda Activa is expected to feature similar design as the predecessor. However, we can expected minor changes on the aesthetic front such as redesigned LED position, a couple of signature accents, chrome chest for front apron and much more. Feature-wise, the new scooter will sport new infotainment system, new odometer, malfunction light, service due indicator, semi digital console and more.

On the dimension front, the new Activa 125 is slightly longer, wider and taller than the BS4 counterpart by 36mm, 3mm and 19mm respectively. The Japanese two-wheeler manufacturer will also be adding new colour options on the new Activa including Black, Heavy Gray Metallic, Rebel Red Metallic, Midnight Blue Metallic Majestic Brown Metallic and Pearl Precious White. The new Honda Activa 125 BS6 is expected to be premium than the predecessor by 10 to 15 percent. So, we can expected the company to launch the new Activa 125 BS6 FI around Rs 65,000.