The International DJ Casper is perhaps the most creative, business-minded turntablists of the decade. Backed by more than 30 years of turntablism, artistry, celebrity collaborations and big venue residencies, he still continues to challenge the limits of the art form and its union with other forms of art, media and communication inorder to drive maximum impact around the world. 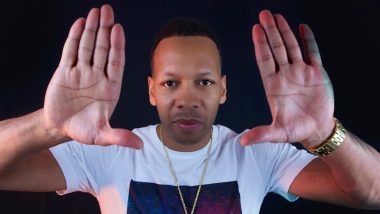 The International DJ Casper is perhaps the most creative,  business-minded turntablists of the decade. Backed by more than 30 years of turntablism, artistry, celebrity collaborations and big venue residencies, he still continues to challenge the limits of the art form and its union with other forms of art, media and  communication inorder to drive maximum impact around the world. In the last two years, the celebrity music producer has built a company termed “iTalk” which merges nightlife, entertainment, and leadership development content into one memorable experience. iTalks have been characterized as high energy, high impact, experiential displays of artistry and aspirational messages, which collide on stage and energize audiences to pursue what they dream.

Most recently, the celebrity entertainer founded the first clothing line catering curiosity and relentless work ethic him into so many directions in those early days; he ultimately found himself selling out neighborhood house parties and accepting the role of head of music and entertainment as a pre-teen for Dances, a well known young adult nightclub in Philadelphia that attracted every act from Dru Hill to Lil Kim to Jay-Z.

Cas has countless TV, film and music credits, some of which include My Super Sweet Sixteen, Housewives of Atlanta, Ski Trippin da Movie and Deadpool. He made his acting debut in the 2015 film Brotherly Love. While Cas spends a lot of his time collaborating with Rodney “Darkchild” Jerkins for whom he is signed to, he still maintains his big venue residencies and always reserves time to collaborate with up and coming artists. Cas also puts out work through exclusively to nightlight professionals, known as DJC Apparel. Cas as he is affectionately called by friends and colleagues, has transferred his love of music and nightlife into a clothing line that exalts the lifestyle of entertainers, club workers, bartenders and disc jockeys. Taglines like “Rhythm is Free” and “It was never just a shirt, it’s always been a lifestyle” are all the rave with party goers and staff members alike.

If you know Cas personally, then you would agree that music has been a part of his DNA from the time he was just a child. Cas grew up in Philadelphia and was raised in a loving home with parents that encouraged his exploration of the art form and his grassroots creativity. It was not uncommon in those early years for Cas to take apart speakers, electrical units, and anything else that he could re-assemble into a “sound machine” that would support the continued practice of his craft. His own label Caspaws Music Group and it is here that he continues to defy commonly held standards on what music is. Experimenting with the most obscure sounds, Casper is producing sonically groundbreaking work.

When we asked The International DJ Casper to explain the significance of iTalk he said “iTalk is so much more than a LIVE motivational nightlife experience, and I knew that with the platform’s inception. There is a heavy digital and virtual reality based component to iTalk and that simply hadn't been developed yet, but that time is here now and I have launched it. iTalk delivers leadership content, stage drama and club nightlife to rising leads who are looking to challenge the status quo. The best is yet to come.”