On January 7, 2020, the US electric carmaker launched a project to manufacture Model Y vehicles in the Shanghai gigafactory, its first overseas plant outside the US. 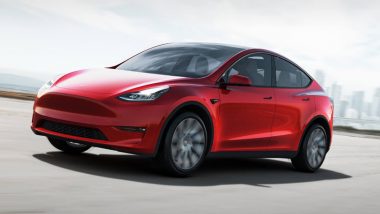 Shanghai, Jan 1: Tesla's Model Y, built in China, goes on sale starting from January and is expected to begin delivery the same month. On January 7, 2020, the US electric carmaker launched a project to manufacture Model Y vehicles in the Shanghai Giga factory, its first overseas plant outside the US. Tesla Cars Might Take Than Longer Than Expected to Hit Indian Roads, CEO Elon Musk Refuses to Give Any Fixed Timeline.

On Thursday, Tesla opened its largest supercharger station worldwide, with 72 charging piles set up in the Jing'an District of Shanghai. As of the end of 2020, the automaker has built more than 600 supercharger stations in China, the Xinhua news agency reported.

The company also plans to build a supercharger manufacturing factory in Shanghai, which is expected to be operational in the first quarter of 2021.

(The above story first appeared on LatestLY on Jan 01, 2021 06:02 PM IST. For more news and updates on politics, world, sports, entertainment and lifestyle, log on to our website latestly.com).