In what can be termed as a piece of good news, Bigg Boss 14 fame Rahul Vaidya might collaborate with superstar Salman Khan for Radhe: Your Most Wanted Bhai. Reportedly, the BB runner-up is all set to lend his voice for the film. Read on. 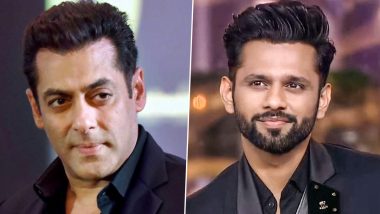 Bigg Boss 14 runner-up Rahul Vaidya might have not won the controversial reality show, but he has defiantly won many hearts. His honesty inside the house was loved by fans and that's how he is one of the most liked contestants from BB 14. Well, post the show, we haven't really heard much about his professional front. However, rumour has it that Rahul might soon sign his first Bollywood project. That's not it, as per the report, there are chances he might collaborate with Salman Khan. Rahul Vaidya And Disha Parmar To Marry Soon; Here's Everything We Know About the Wedding!

According to Tellychakkar, singer Rahul Vaidya is all set to sign the biggest project of his life as he will sing for the superstar in Radhe: Your Most Wanted Bhai which is set to release this Eid. However, there has been no official confirmation on this by the actor nor the singer. Having said that, if this report turns out to be true then it'll be a huge deal for Vaidya.

FYI, Rahul rose to fame from Indian Idol season one where he was the second runner-up. Since then, he has been singing in concerts and more but until now has not sung for a Bollywood film. Bigg Boss 14: Rahul Vaidya’s Longtime Girlfriend Disha Parmar Reacts to the Singer’s Marriage Proposal (Watch Video).

Meanwhile, Rahul was last seen with his girlfriend Disha Parmar at a friend's wedding. The duo looked amazing in the pictures from the occasion, where the singer was seen wearing an Anarkali kurta with a jacket. Also, reports are that Rahul and Disha are set to tie the knot soon. Stay tuned!

(The above story first appeared on LatestLY on Mar 16, 2021 06:02 PM IST. For more news and updates on politics, world, sports, entertainment and lifestyle, log on to our website latestly.com).