It was 1995 when Salman Khan and Shah Rukh Khan shared screen space together for the first time in the film "Karan Arjun". Whether it was the 'Mere Karan Arjun ayenge' dialogue or the songs or the actors' performances, the Rakesh Roshan directorial became a huge hit for several reasons. 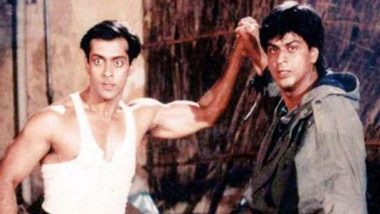 It was 1995 when Salman Khan and Shah Rukh Khan shared screen space together for the first time in the film Karan Arjun. Whether it was the 'Mere Karan Arjun ayenge' dialogue or the songs or the actors' performances, the Rakesh Roshan directorial became a huge hit for several reasons. Reminiscing about the film's 25-year long journey, Salman said: "Karan Arjun is a special film. It is the first time that Shah Rukh and I came together on-screen. I have so many beautiful memories attached to this movie. 'Karan Arjun' is a complete entertainment package and even 25 years after its release, fans can sit together with their families and enjoy it." 10 Years of Love, Sex Aur Dhokha: Nushrat Bharucha Shares How It Is Working Again with Her Chhalaang Co-Star Rajkummar Rao After a Decade.

The film also featured Raakhee Gulzar, Kajol and Mamta Kulkarni in the lead roles. Rakesh Roshan too shared his experience of working on the iconic film. "When I had written 'Karan Arjun', I knew I had to write a different kind of a story from all the work I had done. Reincarnation as a topic was doing the rounds since the black and white era but when I decided to make a film on the theme but using two brothers, I faced a lot of criticism and rejection. So, I wrote the movie with a different lens like that about a mother-son bond. Karan Johar Celebrates 4 Years Of Kapoor And Sons! And There Couldn’t be a Better Film To Re-Watch With Your Family During Self-Quarantine.

"I had immense belief in the story and somehow knew that my audience would feel and believe every dialogue narrated by the characters. The reaction the movie received then and even today is still overwhelming. The fact that a mother's dialogue like 'Mere Karan-Arjun aayenge' got the status it has, is all because of the conviction it was delivered with. If at that time they returned from an unimaginable place, it would have been accepted by the audience. Conviction is the one element that is behind the success of the movie and the milestone being celebrated today," Rakesh added. As Karan Arjun completed 25 years a few months ago, Zee Cinema will air the movie to celebrate the milestone.

(The above story first appeared on LatestLY on Mar 20, 2020 07:25 PM IST. For more news and updates on politics, world, sports, entertainment and lifestyle, log on to our website latestly.com).