On Friday (October 23), Luviena Lodh, who is married to Mahesh Bhatt’s nephew Sumit Sabharwal, shared a video on Instagram accusing the filmmaker of harassment. 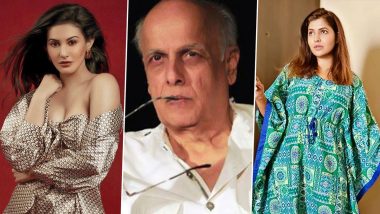 On Friday (October 23), Luviena Lodh, who is married to Mahesh Bhatt’s nephew Sumit Sabharwal, shared a video on Instagram accusing the filmmaker of harassment. She also claimed that she had filed for divorce from Sumit on getting to know that he supplies drugs to Amyra Dastur and Sapna Pabbi and Mahesh Bhatt is aware of this fact. She also called the veteran filmmaker as the ‘biggest don of the industry’. Amyra Dastur’s lawyer Saveena Bedi Sachar has issued a clarification against the accusations made by Luviena and mentioned in the statement that the ‘video contains false statements’. Mahesh Bhatt Rubbishes Luviena Lodh’s Harassment Allegations, Issues Statement and Reveals He Will Take Legal Action.

The statement shared by Advocate Saveena Bedi Sachar on Twitter read, “We refer to the statement in relation to our Client ‘Ms. Amyra Dastur’ AKA ‘Ms. Amy Dastur’ vide the Video recently released by one Ms. Luviena Lodh. Accordingly on instructions and on behalf of our Client it is clarified that, the said Video contains false statements relating to our Client and that our Client is convinced that the same is published with an aim to defame and cause harm, injury and damage to the reputation of our Client.”

The stamen further reads, “Our Client completely refutes all such statements referring to her vide the said Video as being completely false, unfounded and malicious and further reserves her right to seek all remedies available in law and equity. Our Client also states that, it is very unfortunate when individuals resort to such unfounded attacks and condemns the same.”

I m being harrased by Mahesh Bhatt & family. Pls support.

The legal counsel of Vishesh Films, on behalf of Mahesh Bhatt, had issued a statement in response to the video posted by Luviena Lodh. The filmmaker not only called it as ‘false and defamatory’ but also stated that they would be taking legal actions against Luviena Lodh.

(The above story first appeared on LatestLY on Oct 24, 2020 01:48 PM IST. For more news and updates on politics, world, sports, entertainment and lifestyle, log on to our website latestly.com).