Anupam Kher on His Autobiography ‘Lessons Life Taught Me, Unknowingly’: It Can Be Perceived as an Inspiration

Veteran Bollywood actor Anupam Kher has penned an autobiography titled 'Lessons Life Taught Me, Unknowingly' and believes that it would propel people in the right direction. Till date, the actor has dedicated 35 worthy years of his career with over 500 films to Bollywood 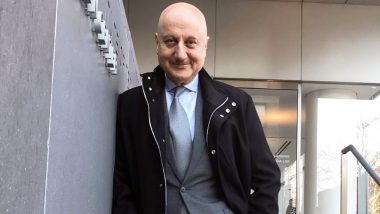 Anupam Kher wishes himself on his birthday.

"When I was struggling, I used to read a lot of autobiographies including Ingrid Bergman, Charlie Chaplin and used to get a boost and inspiration," he revealed. The National Award-winning actor highly believes in the power of optimism and added, "You only have to work hard and believe in optimism."An overwhelmed Anupam said, "If people who read my autobiography get any boost or inspiration in their lives, I would be highly obliged."The 64-year old made his debut in 'Saaransh' which released in 1984. Anupam Kher Shares His Insights on Cinema at England’s Oxford Union

Till date, the actor has dedicated 35 worthy years of his career with over 500 films to Bollywood."I see these 35 years and 515 films in Bollywood as an interval. Although, these 35 years have been very adventurous, interesting and I have seen a lot of ups and downs in these years. But every incident, experience has taught me a thing or the other."Anupam made it big in Bollywood with some notable films like The Accidental Prime Minister, Dilwale Dulhaniya Le Jayenge, A Wednesday to name a few. The actor has also made his stints in the Hollywood industry with films including Bradley Cooper-starrer Silver Linings Playbook, 'Bend it Like Beckham.' He added, "Otherwise, how can a small town boy, son of a forest department clerk who has come so far without blessings. However, all of this is not without hard work and belief."

Speaking about his forthcoming film One Day, Anupam explained, "I always thought that there's also a human behind a judge who carries his own opinions but they have to deliver any judgment according to the laws.""The film follows a retired judge who sets out to punish four men which he acquitted by law during his term," he added. Revealing that the film sheds some light on some untouched issues, Kher said, "In our country, there are so many cases that lie pending and delayed; a lot of inmates are unable to get a lawyer, so this film will also take the audience's notice towards this thing."