Disney + Hotstar, in a virtual press conference on June 29, announced 7 Bollywood films that would be releasing on the OTT platform and they also released the look of Bhuj: The Pride of India. 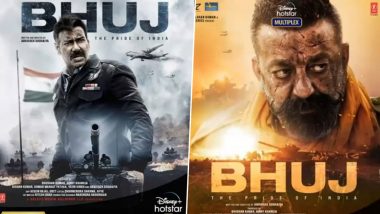 Disney + Hotstar, in a virtual press conference on June 29, announced 7 Bollywood films that would be releasing on the OTT platform, given the scheduling chaos that the on-going COVID-19 pandemic has created. A list of these films are - Akshay Kumar's Laxmmi Bomb, Alia Bhatt's Sadak 2, Varun Dhawan's Coolie No: 1, Ajay Devgn's Bhuj: The Pride of India, Abhishek Bachchan's The Big Bull, Vidyut Jammwal's Khuda Hafiz and Kunal Kemmu's Lootcase. As Disney+ Announces Its Virtual Press Conference with Akshay Kumar, Ajay Devgn and Other B-town Stars Fans Speculate the OTT Announcement of Laxmmi Bomb, Bhuj: The Pride of India and the Rest.

A while back, the poster for Akshay Kumar's Laxmmi Bomb was released during the press conference by Akshay. Touted as one of the biggest films of 2020, it was said to release on May 22, but will now see the light of the day on the OTT platform. Ajay Devgn’s Bhuj: The Pride Of India to Release On Vijay Diwas 2020?.

Next released the poster of Ajay Devgn and Sanjay Dutt starrer Bhuj: The Pride of India. Directed by Abhishek Dudhaiya, the movie sees Ajay in the role of Squadron Leader Vijay Karnik who was in charge of the Bhuj airbase during the India-Pakistan war of 1971. The movie also stars actors Sanjay Dutt, Sonakshi Sinha, Sharad Kelkar, Nora Fatehi, Pranitha Subhash and Ammy Virk. Ajay Devgn Fans Trend #BoycottBhujOnOTT After Reports Suggest That Bhuj: The Pride Of India May Head for a Digital Release.

Ajay Devgn released two posters of the movie, starring himself and Sanjay Dutt. Both actors look intense as they fight with all their might to win their country a victory.

Check Out The Posters Below:

Pakistani bombers dropped 14 napalm bombs on the airstrip, completely destroying it. However, 300 women villagers from the nearby Madhapur village signed on to help the Indian Air Force rebuild the airstrip so that IAF's combat aircraft could take off. Indeed a proud moment for India and an inspirational and patriotic one too.

(The above story first appeared on LatestLY on Jun 29, 2020 05:57 PM IST. For more news and updates on politics, world, sports, entertainment and lifestyle, log on to our website latestly.com).