As Disney+ Announces Its Virtual Press Conference with Akshay Kumar, Ajay Devgn and Other B-town Stars Fans Speculate the OTT Announcement of Laxmmi Bomb, Bhuj: The Pride of India and the Rest 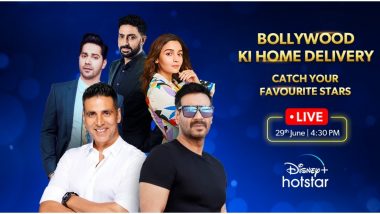 Fans of Akshay Kumar, Ajay Devgn, Alia Bhatt and Varun Dhawan are in for a treat if all goes as expected. It was on a lazy Sunday afternoon that Disney+ announced its virtual press conference with Bollywood stars. They also hinted about the stars making some big announcement and their fans were quick in predicting if it's for their upcoming OTT releases. While Amitabh Bachchan and Ayushmann Khurrana's Gulabo Sitabo paved way for movies to release on a digital medium directly, they were soon followed by Vidya Balan's Shakuntala Devi and Janhvi Kapoor's Kargil Girl. However, the ones who are smart enough would understand this was just the beginning of a new era. CONFIRMED! Janhvi Kapoor Starrer Gunjan Saxena: The Kargil Girl To Premiere On Netflix (Watch Video).

While the cases of COVID-19 continue to rise in the country, the government is not really in favour of opening theatres and multiplexes. And the same concern has prompted the producers to hunt for different alternatives, even it means ditching their theatrical releases altogether. Disney+'s upcoming press conference is making fans anxious of its upcoming releases and their slate may include releases like Akshay Kumar's Laxmmi Bomb, Alia's Sadak 2, Varun's Coolie No 1, Ajay's Bhuj: The Pride of India and Abhishek Bachchan's The Big Bull. While this is just a prediction, netizens are fully convinced about its plausibility. Check out their reactions. Janhvi Kapoor On Delay In Gunjan Saxena And Other Movies: 'Main Priority Is To Recover As A Nation'.

Check Out the Fan-Made Promo

The Announcement is Slated for Tomorrow

More direct #OTT releases of noted Bollywood films on @DisneyPlusHS. Official announcements tomo at 4:30pm! Dunno if the trend is healthy or its just a timely effort to reduce the loss for producers. #LaxmmiBomb, #BhujThePrideOfIndia #DilBechara among them.

Which Movie are You Really Excited About?

Twitterati are Waiting for an Official Announcement

While Dil Bechara has already been announced by Disney's new OTT platform, they were planning to rope in some Bollywood biggies for the longest of time. Now if Laxmmi Bomb and Bhuj actually end up releasing on Disney+ Hotstar, it will only make their digital presence stronger. Looking forward to their virtual press conference tomorrow.

(The above story first appeared on LatestLY on Jun 28, 2020 05:43 PM IST. For more news and updates on politics, world, sports, entertainment and lifestyle, log on to our website latestly.com).