Amid the lockdown, it's filmmaker Ram Gopal Varma who recently dropped a BOMB and teased fans with his upcoming project titled as 'Climax'. It stars adult star, Mia Malkova. 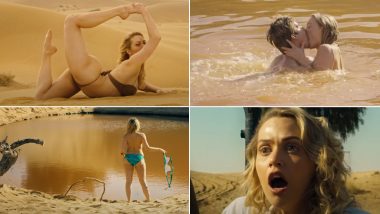 The current lockdown scenario in the entire country is ofcourse getting boring with each passing day. But then thanks to our Bollywood celebs social media timeline we all entertained to the 't'. Well, amid this, it's filmmaker Ram Gopal Varma who recently dropped a BOMB and teased fans with his upcoming project titled as 'Climax'. Yep, you read that right! Turning the climate around you hotter looks like Varma's this project is quite an erotica. This is the director's second-time collab with the adult star, Mia Malkova. And just in case you've still not watched the teaser, we would say, don't miss this delicious treat. Ram Gopal Varma Jokes That He Has Been Tested Positive for Coronavirus on April Fools Day, Later Apologises (View Tweets).

The teaser starts with a sexy looking Mia stretching herself in between a sandy region in a bikini. The scene is surely enticing and we are sure it'll make you watch more. So ahead in the clip, we get to see how the lead actress enters a 'Do Not Enter' zone and later founds herself in some smoochy as well as scary trouble. That's not it as the video also has a scene where Mia gets naked with an aim to have a bath in a pond. Ram Gopal Varma Offers an Explanation After Sona Mohapatra Slams His For Sexist Remarks On Women Outside Bengaluru Liquor Store.

Check Out 'Climax' Film's Teaser Below:

The flick's official trailer will be out on May 18, 2020, at 9.30 in the morning. Well, we bet after watching the teaser, you can't wait to see what's the actual thriller story all about. Having said that, RVG on his Twitter handle has been on a photo-sharing spree and has uploaded moments of him with Mia. Coming back to 'Climax', tell us did you like the tease or not? Stay tuned!

(The above story first appeared on LatestLY on May 14, 2020 05:42 PM IST. For more news and updates on politics, world, sports, entertainment and lifestyle, log on to our website latestly.com).