Bollywood actress Sanya Malhotra, who recently made a guest appearance on the show Dance Deewane, recalled a time when she was rejected by choreographer Dharmesh Yelande. Check out the full story. 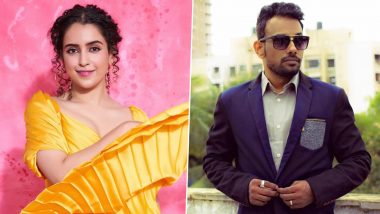 Bollywood actress Sanya Malhotra, who recently made a guest appearance on the show Dance Deewane, recalled a time when she was rejected by choreographer Dharmesh Yelande. Dharmesh, who is a judge in the dance reality show, did not select Sanya in an audition at the start of her career. Sanya Malhotra Birthday Special: Cute and Charming, Her Style File Is In Sync With Her Bubbly Persona (View Pics).

Talking about the incident, she said, "Life has come a full circle for me today. Six years back, I had come to this studio for a dance-reality show audition and I did not clear it." "And I remember, it was 1 a.m. in the night when I got free and I called my friend and said that I have not been able to get through and to come and pick me up. And you were there, Dharmesh sir. I was not able to clear it because of you. But now, I am here to promote my film," she added. Pagglait Trailer: Sanya Malhotra Plays a Young Widow Who Can’t Grieve in Netflix’s Slice of Life Comedy.

Dharmesh congratulated Sanya for all the hard work that she had put in and applauded her for still moving on and achieving her dreams. He also said she was a great example for anyone who faces rejection and continues to forge ahead. Meanwhile, Sanya's film Pagglait is being streamed on Netflix.

(The above story first appeared on LatestLY on Mar 28, 2021 11:27 PM IST. For more news and updates on politics, world, sports, entertainment and lifestyle, log on to our website latestly.com).