Dev Anand Birth Anniversary: Did You Know The Late Legend Starred in an English Film That Never Released In India? Here's Where You Can Watch It Online!

Dev Anand has this innate charm which made him highly attractive and lovable. His unique style of acting had many followers and still do. Guess that was the reason why he played a lead in a Indo-Filipino English film titled The Evil Within. Unfortunately, it never released in India but we can tell you where you can watch it. 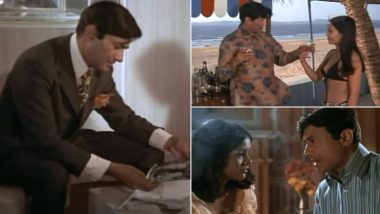 Dev Anand in The Evil Within (Photo credit: YouTube)

Dev Anand was an actor par excellence. In the 40 and 50s, there was no one as charming as him. He had an air of confidence that was unmatched. His lover boy image made many swoon over him. Even when he was past his prime, he had a disarming way of serenading not just women but men too. He has put Hindi Cinema on the global map with his much-talked about film Guide. Such was his prowess and popularity that even Hollywood came knocking at his door. Dev Anand played the lead in The Evil Within, a Indo-Filipino English film which was distributed by 20th Century Fox. But alas, it never got a release in his home country. Shekhar Kapur Cites Examples of Raj Kapoor, Dev Anand Launching Rishi Kapoor, Vijay Anand, Says ‘Not About Nepotism, It’s About Opening Gates to New Talent’

The Evil Within saw Dev Anand team up with America actor Rod Perry to eradicate opium trade. The film was directed by Filipino director Lamberto V Avellana and starred Vietnamese actress Kieu Chinh. In fact, the movie had many Navketan regulars like Zeenat Aman, Prem Nath, Iftekar including cinematographer Fali Mistry who worked on Guide. Pakistan Prime Minister Imran Khan Admits He Was Asked to Work in a Bollywood Film by Dev Anand

The Evil Within (1970), lensed by the legendary Fali Mistry, was an English-language film starring Dev Anand.

It marked acting debuts of Zeenat Aman and Rod Perry, who went on to star in The Black Godfather (1975) and the 70s TV show S.W.A.T.

(The above story first appeared on LatestLY on Sep 26, 2021 08:10 AM IST. For more news and updates on politics, world, sports, entertainment and lifestyle, log on to our website latestly.com).