Dil Bechara Choreographer Farah Khan: 'I Knew Sushant Singh Rajput Would Be Able to Do It Perfectly' 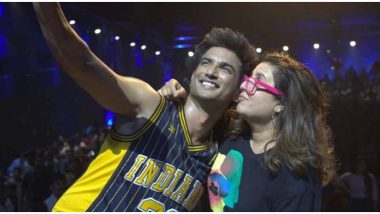 The first track from Sushant Singh Rajput's last film, Dil Bechara, has dropped on YouTube. The title track has been composed by AR Rahman, and it is bound to climb up on the music charts. Not just for it has the late actor, but for the sheer fun brilliance of the number. Farah Khan's energetic choreography adds to the charisma. And, in case you have not noticed, the song is a single shot with no cuts. Farah choreographed the song for free for her long time friend, Mukesh Chhabra, who is making his directorial debut. AR Rahman Shares Experience of Composing Music for Sushant Singh Rajput’s Dil Bechara, Says ‘The Whole Album Is Carefully Curated’.

Farah took to her social media to talk more about "Dil Bechara" and Sushant Singh Rajput. She said that she knew Sushant will be able to pull off the single-shot choreography. "Sushant had once come to a reality dance show that I was judging as a celebrity guest and that's the only time the celebrity guest danced better than the contestants on that show," she added. Sushant was a dancer at Shiamek Davar's academy. Dil Bechara Title Track: Fans Are In Love With Sushant Singh Rajput’s Charming Smile And Cool Moves In The Song Crooned By AR Rahman! (View Tweets).

Farah further revealed that they practice for one day and shot the song in half a day. Sushant had asked for home-cooked food from Farah in return of nailing the choreography. Farah got him the food, and added, "I should have fed you a little more, hugged you a lot more,"

This song is special!1sttime @itsSSR n i worked 2gether.he nailed the 1shot song perfectly n only reward he wanted was food frm my home..in hindsight I shld hav fed u a little more, hugged u a lot more.thank u @CastingChhabra 4 including me inur journey.. https://t.co/2OcK9IRCFf pic.twitter.com/rzIK9pkldH

This song is particularly close to me because it was the first time i was choreographing Sushant.. we were friends for a long time but never worked together.. i had also promised Mukesh chhabra that whn he makes his directorial debut I would do a song for him.. i wanted the song to b done as a 1 shot song because i knew Sushant would b able to do it perfectly.. i remembred Sushant had once come to a reality dance show that I was judging as a celebrity guest and that's the only time the celebrity guest danced better than the contestants on that show.. we rehearsed a whole day n then finished shoot in half a day ! As a reward for nailing it perfectly all Sushant wanted was food frm my house which i duly got for him..i see the song n all i can see is how Alive, how happy he looks in it.. yes this song is very special to me.thank u @castingchhabra for including me on this journey of urs. https://bit.ly/DilBecharaTitleTrack. Watch on my INSTASTORY pls... #missusushantsinghrajput

"I see the song and all I can see is how alive, how happy he looks in it," Farah concluded, calling the song special to her and thanking Chhabra for including her.

(The above story first appeared on LatestLY on Jul 10, 2020 04:31 PM IST. For more news and updates on politics, world, sports, entertainment and lifestyle, log on to our website latestly.com).