Shah Rukh Khan's Don 3 keeps trending every other day as his fans are just impatient to seem again as the scheming gangster. Farhan Akhtar even teased about it a few days back. Now when the Toofan teaser released, the trend returned again. 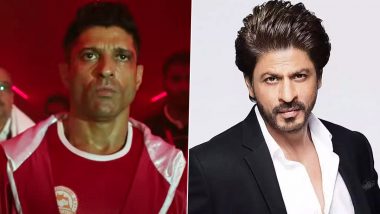 Farhan Akhtar's Toofan teaser is getting a lot of love from the industry and the netizens. The film has taken the direct route to OTT as it will start streaming from May 21 on Amazon Prime Video. Shah Rukh Khan too admired the teaser by tweeting about it. He wrote, "Wow! Always inspired by the effort u put in ur work. “Kinare hi se Toofan ka tamasha dekhne wale, Kinare se kabhie andaza-e-Toofan nahi hota” But his fans seem to be on a different tangent altogether. They decided to trend Don 3 as well as Toofan's teaser. From Don 3 to Kalpana Chawla Biopic: Priyanka Chopra Gives an Update on all her Rumoured Projects

Farhan, while celebrating nine years of Don, had posted that the chase is still on. Many jumped to the conclusion that he is keeping the possibility of the third film still on. Now his movie's teaser is trending, so it seems fans decided to try their luck with Don 3 update yet again.

Ready to dive into Toofaan.All the best to the team for this awesomeness. Luv @FarOutAkhtar @RakeyshOmMehra

Here are some of the reactions...

The irony, we tell you

when you release toofan teaser but Don 3 in trends: pic.twitter.com/MbyMtb8QxO

The power of Shah Rukh Khan or is it the fans?

Craze of the franchise of King Khan ! #Don3 #ShahRukhKhan pic.twitter.com/xJqZzYtLew

A perfect question...SRK care to answer?

There were reports that Shah Rukh has been replaced by Ranveer Singh first and Shahid Kapoor later in the franchise. But Zoya Akhtar dismissed it all calling it just 'nonsense'

(The above story first appeared on LatestLY on Mar 12, 2021 06:46 PM IST. For more news and updates on politics, world, sports, entertainment and lifestyle, log on to our website latestly.com).