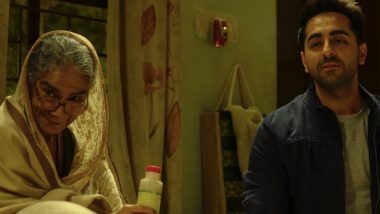 The demise of Surekha Sikri has made Ayushmann emotional. He took to Instagram and recalled his experience of working with the late iconic actor in the 2018 released film 'Badhaai Ho'.

"In every film we have a family and we end up spending more time with the film family than our own families. One such beautiful family was in 'Badhaai Ho'. Out of all my films, it was the perfect family with a perfect cast. Surekha Sikri was the head of our family, who was more progressive than the entire family tree. You know what, that was her in real life too. A complete boho. A chiller. Young at heart," he wrote.

Ayushmann also shared an anecdote from his last conversation with Surekha Sikri. "I remember when she was boarding an auto-rickshaw after the screening of our film, Tahira and I gave her a lift back home and we said "ma'am you are the real star of our film" and she replied 'wish I get more work'. Tahira and I were speechless. We watched her frail demeanour walking towards her building. That's my last memory of her," he added, urging people to "watch her recite Faiz Ahmed Faiz's nazm 'Mujhse Pehli Si Mohabbat Mere Mehboob Na Maang'."

Surekha Sikri, whose last screen appearance was in the Netflix anthology 'Ghost Stories' (2020), died on Friday morning at the age of 75. (ANI)