For Sushmita Sen, Aarya Is Not Just a Professional Choice but a Personal Win

For Sushmita Sen, "Aarya" is not just a professional choice, but a personal win. "'Aarya' is a personal win. It is amazing how much it has taken for me to transcend layers of disappointment and pat my own back and remind myself 'apna time aayega'," Sushmita said. 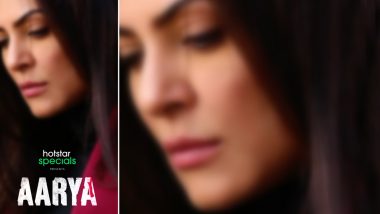 For Sushmita Sen, "Aarya" is not just a professional choice, but a personal win. "'Aarya' is a personal win. It is amazing how much it has taken for me to transcend layers of disappointment and pat my own back and remind myself 'apna time aayega'," Sushmita said. The actress made her comeback with "Aarya", which delves into how organised crime and betrayal run deep in a family. It is about how her protagonist Aarya is pulled into the narcotics business when her family is threatened. Aarya: How Sushmita Sen’s Web Show Was Directed All Over Again at the Editing Table

Talking about the success of the show, she said: "The universe conspired for this show to come my way. The script, ace director Ram Madhvani and his amazing team is a soul connect for me. We think alike on many levels. Aarya is a character with many layers. In season one we haven't even scratched the surface of the character and we have 5 seasons written. You can't imagine what's to come after." Namit Das Dedicates Heartfelt Appreciation Post for Aarya Co-Star Chandrachur Singh

"For the first time in my career, and I say this with immense pride and love, when I look at 'Aarya' as a whole, it is very difficult for me to choose one scene. I have too many moments in it that I sit there and I forget it's me and I say I love this Aarya. She has got so many things that I have and so many things I wish I had. Aarya is not just a performance but a soul," she added. Asked what were the things she discovered about herself while making "Aarya", Sushmita said: "Every time I went on the set and essayed a character, it was a lot of projection rather than feeling. The kind of commercially inclined projects I did, didn't really help me grow a whole lot.

"So I never really discovered Sushmita in a film. These 10 years made me an observer of life. While filming 'Aarya', I had to no longer portray or project. I had to be. We were not allowed to use glycerin to cry or cut to add any sweat and a feel. Every emotion had to be portrayed then and there and the best way you could reach the emotion was to feel it," she said during a conversation in "IMDb On the Scene".

(The above story first appeared on LatestLY on Jul 03, 2020 12:31 PM IST. For more news and updates on politics, world, sports, entertainment and lifestyle, log on to our website latestly.com).