Hrithik Roshan and Katrina Kaif's Zindagi Na Milegi Dobara To Have A Sequel? 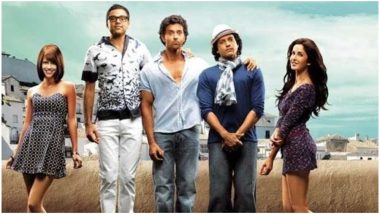 There are not many who ha been have not been awed by the sprawling beauty of Zoya Akhtar's slice of life drama, Zindagi Na Milegi Dobara. Though there are some detractors who call it as a Spain travelogue, the movie is much more than that. It discusses friendships, love, life, priorities, while also being entertaining at that. The movie had an ensemble cast with Hrithik Roshan, Farhan Akhtar, Abhay Deol, Katrina Kaif, Kalki Koechlin in the lead, while Naseeruddin Shah and Deepti Naval appear in cameos. This was also Zoya Akhtar's one true hit, as her other two movies - Luck By Chance and Dil Dhadakne Do - disappointed at the box office.

There have been talks for some time that Zindagi Na Milegi Dobara Might be having a sequel. Earlier in an interview, Hrithik had said, "I am aware of that (the rumour), but not many film-makers can make such movies. So, I have to call Zoya once more, and say, ‘Please write something, and if you think I am good enough, please cast me in your film’. I guess I will have to beg her. But I think it [the sequel] will happen maybe three to four years from now."

But it looks like Hrithik's begging might have worked. As per a report in KoiMoi, a source close to the project, confirmed that Zoya might start prepping up for the sequel very soon. The source revealed, “Zoya feels that the audience would be keen to know what the characters are up-to in today’s time. The sequel will retain all the characters and the story will take a 10-year leap. It is too early to talk about the same. Although the basic premise has been locked, Zoya will start working on the screenplay by end of this year once the final cut of Gully Boys is ready. If all goes as planned, the film would go on floors in the second half of 2019.”

Currently, Zoya Akhtar is shooting for Gully Boy, with Ranveer Singh and Alia Bhatt, where both play rappers. Hrithik, meanwhile, is shooting for Super 30, while he also has that untitled movie with Tiger Shroff and Krrish 4 in the pipeline. Katrina Kaif is busy shooting for Zero and Thugs of Hindostan. So if this news is true, don't expect it to start anywhere in the near future!

(The above story first appeared on LatestLY on Mar 07, 2018 06:25 PM IST. For more news and updates on politics, world, sports, entertainment and lifestyle, log on to our website latestly.com).