Not Shah Rukh Khan, Katrina Kaif To Romance This Star in Zero?

Abhay Deol, who was last seen in 2016's sleeper hit Happy Bhaag Jayegi, will also be seen this year in the sequel to that movie 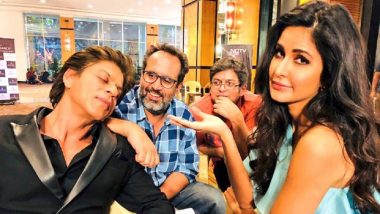 Every little tidbit we are getting about Zero, Shah Rukh Khan's sole release in 2018, is exciting fodder for us. For the first timer ever, Shah Rukh Khan will be playing a vertically challenged man, and going by the little teaser at the start of the year, the VFX team has done a great job in pulling up a convincing picture of SRK as a dwarf. This will also be his first collaboration with director Aanand L Rai, who previously made the Tanu Weds Manu movies and Raanjhanaa. Zero also reunited SRK with his Jab Tak Hai Jaan co-stars, Anushka Sharma and Katrina Kaif, while also boasting of a plethora of cameos.

We have seen pictures of Katrina Kaif dressed in royalty from the sets of the movie. It is confirmed that she is playing a movie star in the movie, though she is not playing herself (even though the makers were toying with the idea of naming the movie, 'Katrina Meri Jaan'). SRK's character is supposedly obsessed with this film star, but now it looks like he has to compete with another star over her affections.

As per a report in Filmfare, Katrina Kaif's character will be seen romancing Abhay Deol in the movie. The makers were trying their best to hide his role in the movie, but it looks like the cat is out of the bag. Katrina Kaif and Abhay Deol have earlier worked in Zindagi Na Milegi Dobara, though the former was paired with Hrithik Roshan in the movie.

Abhay Deol, who was last seen in 2016's sleeper hit Happy Bhaag Jayegi, will also be seen this year in the sequel to that movie, that also has Sonakshi Sinha in it. Then there is also a Hollywood thriller set in Delhi, that will also have The Mummy star Brendan Fraser in the lead.

All in all, looks like we will get to see more of Abhay Deol on the big screen, which is never a bad thing!

(The above story first appeared on LatestLY on Mar 06, 2018 04:50 PM IST. For more news and updates on politics, world, sports, entertainment and lifestyle, log on to our website latestly.com).