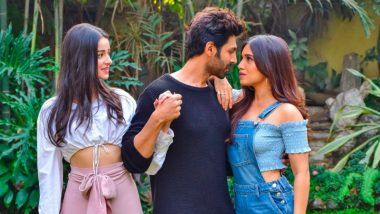 Kartik Aaryan, Ananya Panday and Bhumi Pednekar are all set to enthrall the audience on December 6, 2019. Yes, their upcoming next titled Pati Patni Aur Woh has finally got a release date. The makers have released an official statement regarding the same. Initially the film was scheduled to release on January 10, 2020 but looks like after Ajay Devgn announced that Tanhaji: The Unsung Warrior will be releasing on the same date, the makers of the Kartik Aaryan starrer thought of it to be wise to prepone the release. Ajay Devgn Starrer Tanhaji: The Unsung Warrior to Release on January 10, 2020.

It was only a couple of hours ago when Ajay took to social media to announce the release date of his next. He mentioned how he is eagerly waiting for the audience to start their new year with his movie. Talking about Pati Patni Aur Woh, the film brings together Kartik, Bhumi and Ananya together for the first time. It is a remake of 1978's drama of the same name. A modern redux of B.R. Chopra's film will see Kartik reprising the role of Sanjeev Kumar in the film. There is a lot of buzz around the film, thanks to all the rumours about Kartik and Ananya. But we still don't know what's cooking between them. Pati Patni Aur Woh: Kartik Aaryan, Ananya Panday and Bhumi Pednekar Starrer to Release on January 10, 2020.

(The above story first appeared on LatestLY on Mar 24, 2019 12:16 PM IST. For more news and updates on politics, world, sports, entertainment and lifestyle, log on to our website latestly.com).