Madam Chief Minister: Richa Chadha Reacts to the Backlash and Clarifies That Her Film Is Not About BSP Supremo Mayawati

The poster of the film shows a bruised Richa Chadha in a pixie cut hairstyle as she holds a broom in her hand. Co-stars Manav Kaul and Saurabh Shukla also feature in the poster in an intense avatar. 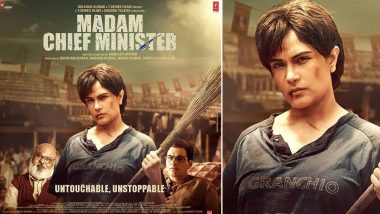 Richa Chadha knows how to create a stir with the projects that she picks up. Her film Shakeela was making enough noise when she announced her next project titled Madam Cheif Minister. The film is based on the lines of politics and the first poster of the film, which was unveiled yesterday, was not very well received by the audience. Sharing the poster on Twitter, Richa described the film as a "political drama about an ‘untouchable’ who hustles and makes it big in life!” and has people speculating if the film is based on BSP supremo Mayawati since then. Richa Chadha Starrer Madam Chief Minister to Theatrically Release on Jan 22.

The poster shows a bruised Richa Chadha in a pixie cut hairstyle as she holds a broom in her hand. Co-stars Manav Kaul and Saurabh Shukla also feature in the poster in an intense avatar. Twitteratis felt that the poster was derogatory and Richa holding a broom is not how you show casteism in a film. Many of them also contemplated that the film will revolve around Uttar Pradesh's former Chief Minister Mayawati but Richa made sure she sets the record straight.

Replying to one of the tweets, Richa clarified that Madam Chief Minister is not at all based on the life of Mayawati. Her tweet got a few replies where a user went on to say, "Who else was a Dalit Chief Minister." A user re-confirmed with her if this was a biopic or not but we think with her tweet, Richa made it very clear that the film is not an inspiration but a fictional story.

However , film is not based on her. https://t.co/YnroI1nWEG

Produced by T-Series Films and Kangra Talkies, Madam Chief Minister also features Akshay Oberoi and Shubhrajyoti in pivotal roles. This film would be Chadha's second theatrical release amid the coronavirus pandemic, after Shakeela which hit cinema halls last month. The film is written and directed by Subhash Kapoor of Jolly LLB fame and will hit the theatres on  January 22.

(The above story first appeared on LatestLY on Jan 05, 2021 05:08 PM IST. For more news and updates on politics, world, sports, entertainment and lifestyle, log on to our website latestly.com).