Manmohan Desai Birth Anniversary Special: 5 Blockbuster Hits Of The Filmmaker And Where To Watch Them

Manmohan Desai movies were true entertainers. It won't be wrong to say that the adage 'leave your brains at home' got its origin from his movies which were primarily about lost and found. But Desai's movies were the perfect escape to the world of friendship, brotherhood, love, national integration and all things we feel good about. 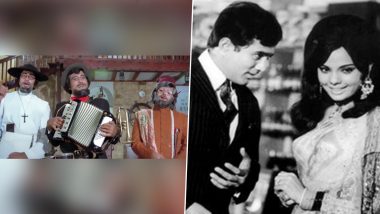 Manmohan Desai can rightfully be called the Baap of commercial cinema. From dreamy songs, heart-warming love stories, implausible action that defeats the purpose of Physics, lost and found and so much more. Everything that you watch today in mainstream Bollywood movies is an inspired version of some or the other tropes that Desai used to employ in his movies. One of them being Amitabh Bachchan himself. At times, you need such good's victory over evil kind of convenient cinema to feel good. For Desai, films were supposed to entertain and that's exactly what all his movies did.  Amitabh Bachchan Shares Throwback Picture Taken Post His Recovery From Coolie Injury To Celebrate 45 Million Followers On Twitter

For the generation which completely skipped Doordarshan, it could be hard to comprehend but if anything that you see in commercial films and love it, you have to thank Desai to make it a template that never loses at the box office. So on his birth anniversary, we would like to introduce Gen-Y to the five blockbuster movies of the man who made Bollywood massy!

A classic lost and found story of three brothers who get separated very young due to a tragedy and are brought up by people from different religious beliefs. Maa in Cinema comes from these kinds of movies. It's also the biggest movie on the idea of 'Leap Of Faith'. You have to keep doing in every scene more or less.

Sachcha Jhootha was the second-highest grosser of 1970 starring Rajesh Khanna and Mumtaz. A story about a simpleton look-a-like of a gangster getting embroiled in the latter's mess. It was one of the 15 consecutive hits of Khanna that made him the first superstar of Bollywood.

A story of three men who are connected to each other through blood and friendship. A predictable Desai potboiler, this was one of the rare movies that apparently managed to earn Rs 1 crore in nearly every territory.

Parvarish was a Diwali release of 1977 and was the fourth highest-grossing movie of the year. A story of one son who thinks he is adopted and the second son is an honest and selfless cop. The moral of the story is it's all about a person's upbringing. Desai's movies often get mocked for his irrational sub-plots but at times they do teach life lessons.

As per reports, Coolie earned Rs 10 million per territory which was a huge deal back in 1983. Obviously, people remember it more for Amitabh Bachchan's near-death experience on the sets of the movie.

(The above story first appeared on LatestLY on Feb 26, 2021 08:20 AM IST. For more news and updates on politics, world, sports, entertainment and lifestyle, log on to our website latestly.com).