"I am happy about the fact that this is the beginning of a good thing," feels Mukesh Khanna after Laxmmi Bomb title gets changed to Laxmii. Read his full quote inside. 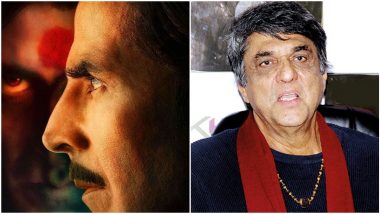 Mukesh Khanna was among the many names who strongly opposed the titled of Akshay Kumar's horror-comedy, Laxmmi Bomb. The backlash that they received on social media then prompted the makers to have a title change. Result? Laxmmi Bomb became Laxmii.  The debate here was that the filmmakers were insulting Hindu Goddess Laxmi by having this name. The criticism eventually compelled the makers to make the necessary changes in title and veteran actor is certainly happy with the update. Mukesh Khanna aka Shaktimaan Supports CarryMinati But Advises Him To Make Better Choice Of Words (Watch Video).

When ZoomTV.com got in touch with the actor to know his reaction on the same, he said, "I can definitely say that I am more than happy but more than me being happy, I am happy about the fact that this is the beginning of a good thing. People from here on will be careful while taking pangas with Hindu devi devtas. Jo unlogo ko easy lagta tha, soft target lagta tha that they can do anything. If I am not mistaken, there was a film named Sexy Durga, they even had the atrocity to fight out. They had defended the film saying in the film there is a character named Durga but Durga is also the name of our devi right?"

Speaking about how his opposition to the title change could have spoiled his relation with Akshay Kumar, Mukesh Khanna said, "I took a stance at the cost of my relation getting spoilt with Akshay Kumar, with whom I shared very good relations. I have done six films with him. In fact, his introductory film Saugandh was with me. I was thinking let him feel bad. At the expense of him feeling bad, I am happy that better sense prevailed. And they thought it rightly. The film will work on basis of its content, title se toh log sirf theatre mein ghuste hai. After that it is you, your content and if you are confident then why are you taking cheap measures of giving an intentionally provocative title. Even Tom, Dick and Harry can understand that Laxmmi Bomb kehne se kya intention hai."

The actor's earlier misogynist comments had irked many sentiments. When asked about #MeToo movement in India, Mukesh Khanna had claimed that working women who want to compete with men and are solely responsible for #MeToo.

(The above story first appeared on LatestLY on Oct 30, 2020 04:00 PM IST. For more news and updates on politics, world, sports, entertainment and lifestyle, log on to our website latestly.com).