Mukesh Khanna Blames #MeToo Crimes On Women Wanting to Work Outside Their Homes and Be Equal to Men, Clip of His Misogynistic Statement Goes Viral (Watch Video)

Veteran actor Mukesh Khanna in his interview talked about the #MeToo movement and blamed women for the same. Check out the full story here. 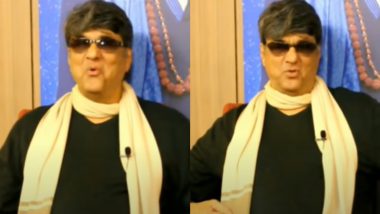 Television actor Mukesh Khanna and controversies go hand-in-hand. Until, now if you follow social media, you'll know that the veteran actor who is known to play the role of Bhishma Pitamah in Mahabharat never minces his words and is straight forward in real life. From calling out Sonakshi Sinha to tagging The Kapil Sharma show as vulgar, the man is known to make statements that might irk many. And now, we've come across the actor's latest interview with The Filmy Charcha where Khanna talked about the #MeToo movement and blamed women for the same. The Kapil Sharma Show: Mukesh Khanna Lashes Out at Kapil Sharma’s Comedy Show, Calls It Vulgar (View Post).

However, in his defence, he later adds that in this modern world no woman would want to just be a housewife and he is not against working women. Well, we wonder, what would be the reaction of many women out there after Mukesh's sexist remarks. What're your thoughts? Tell us in the comment section below. Stay tuned!

(The above story first appeared on LatestLY on Oct 30, 2020 01:28 PM IST. For more news and updates on politics, world, sports, entertainment and lifestyle, log on to our website latestly.com).