Neetu Kapoor's daughter Riddhima Sahni recently gifted her mother a little cutesy furball to keep her company. Check it out. 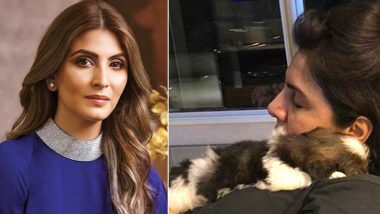 It's been more than a month since the Chandni actor, Rishi Kapoor said goodbye to the world forever. His death due to a prolonged illness was disheartening to fans as well as family. But as they say, time heals everything, and so even the Kapoor clan has been staying together and doing their best to be cheerful amid the tough times. Also, as we all know that Rishi's wife, Neetu Kapoor often keeps her fans updated by posting inspiring messages on Instagram and she has done the same thing again. However, this time Neetu is going all aww as she welcomes a new furry member to the Kapoor Khandaan. Rishi Kapoor's Scrabble Legacy Comes Alive In Neetu Kapoor's Game As She Defeats Daughter Riddhima Twice (View Post).

Neetu shared a picture of a pooch resting on her shoulder. Yep, that's the new member we are talking about! The actress in the photo can be seen all jolly as the little furball cuddles her. Well, what better therapy than a pooch, right? The interesting part is here is that the four-legged friend is gifted to Neetu by her own daughter, Ridddhima Kapoor Sahni. And looks like they've also given her a name and its doodle. 'End of our story': Neetu Kapoor’s Bittersweet Post on Rishi Kapoor’s Demise Is Heartbreaking (View Pic).

Well, the daughter exactly knows how to keep her mum happy. Meanwhile, from the time dad, Rishi Kapoor passed away, Riddhima has been staying with her family in Mumbai. She often shares cutesy moments of the Kapoor's having a fun time at their abode. It's nice to see how the family is slowly and steadily recovering from personal loss. Stay tuned!

(The above story first appeared on LatestLY on Jun 18, 2020 04:17 PM IST. For more news and updates on politics, world, sports, entertainment and lifestyle, log on to our website latestly.com).