Pati Patni Aur Woh: Kartik Aaryan's Leaked Image from the Sets Shows Him in the Chintu Tyagi Avatar, Sneaking Out of a Window - See Pic! 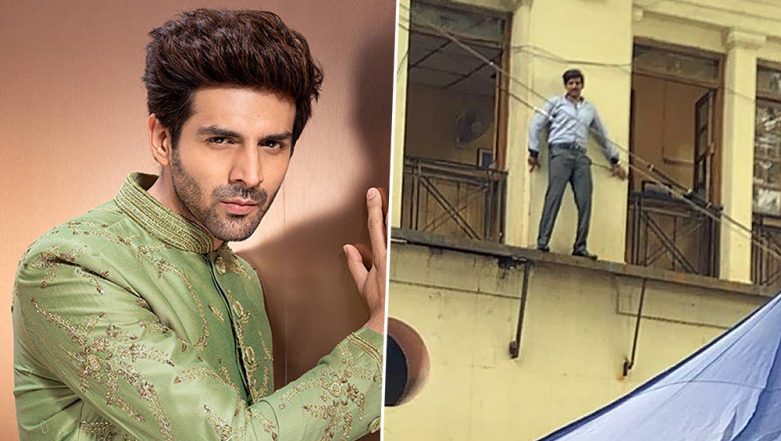 Kartik Aaryan recently wrapped up the shooting for his upcoming Imtiaz Ali film co-starring Sara Ali Khan. The actor bid an emotional goodbye to the film as he took to his social media to share a special post for the director. Kartik is currently one of the busiest actors in Bollywood considering he has all the plum projects. The actor has now started shooting for his next, Pati Pati Aur Woh remake and recently flew to Lucknow for the same.  Kartik Aaryan Buys a New Flat in Mumbai Worth Rs 1.60 Crores and It Has a Huge Connection to His Past.

The makers had earlier released his first look from the film as Chintu Tyagi. Kartik is seen in a never-seen-before avatar in this film. Unlike his usual cool image, the actor will be seen sporting a moustache with chequered shirts.

It is a matured look compared to his previous works.

Now an image of the actor from the sets of the film has leaked on the internet. In the photo, Kartik is seen in a formal shirt and what looks like he is sneaking out through a window. We wonder what Kartik's character is doing in this scene. It looks like he could be jumping through the window, so as to not get caught by his wife.

Check out the image here:

Pati Patni Aur Woh also stars Bhumi Pednekar and Ananya Panday in lead roles. Recently, Bhumi flew to Lucknow a few days before her actual schedule to prep for the film. According to an insider, Bhumi has a different process,who said, "For her next Pati, Patni Aur Woh also, Bhumi traveled to Lucknow two days before the shoot started. She soaked in the city and then did a straight 6-hour prep all by herself in her hotel room."  Bhumi Pednekar Begins Shooting for Pati Patni Aur Woh in Lucknow, Announces Through Her Instagram Post – View Pic.

We are definitely looking forward to this film considering this is the first time Kartik Aaryan and Ananya Panday will be working together. Even before the announcement of their film, there have been link-up rumours about the two. The film is all set to release in January 2020.