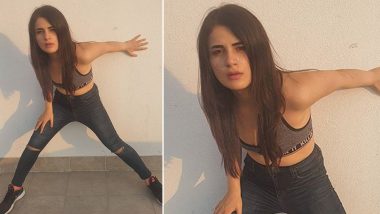 Bollywood actress Radhika Madan's hilarious new photograph shows how a photoshoot is like after a "leg day". Radhika took to Instagram and shared a snapshot from a photo-shoot where she is seen bending down and holding her knee with one hand and the wall with the other. In the image she is seen dressed in jeans and a grey crop top. "Photoshoot after leg day be like," read her caption. Radhika Madan Is a Carefree Chic in Denim Shorts; Actress Shares Smiling Pic Playing Synthesiser

Radhika recently shared two pictures. The first image was a beautiful black and white one, but it was the second snapshot that caught the attention of fans. In the second image, Radhika professes her love for golgappas. "Eyes locked. Heart raced. Mind stopped. #kuchkuchhotahai #tumnahisamjhoge," she captioned the image. Angrezi Medium Actress Radhika Madan On Nepotism Debate: ‘Stop Cribbing And Start Working On Yourself’

Radhika was last seen in "Angrezi Medium", the last Bollywood release before the lockdown, and also the final film of the late Irrfan Khan. The comedy revolves around the relationship between a single father, played by Irrfan, and his daughter, essayed by Radhika. She will next be seen the upcoming film romantic comedy "Shiddat", which also stars Mohit Raina, Diana Madan and Sunny Kaushal, and is directed by Kunal Deshmukh of "Jannat" fame on a script by Shridhar Raghavan and Dheeraj Rattan.

(The above story first appeared on LatestLY on Jul 13, 2020 05:18 PM IST. For more news and updates on politics, world, sports, entertainment and lifestyle, log on to our website latestly.com).