Ranvir Shorey vs the Bhatt Family: They Called Him an Alcoholic Abuser and He Blamed them for Isolating Him in the Industry - A Recap of Their Frigid History

Before going through Ranvir Shorey's recent statement against the Bhatts, let's have a brief recap into their equation and what exactly went wrong and when. 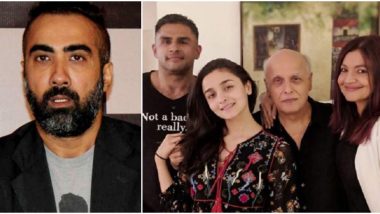 Even before Kangana Ranaut waged her war against the Bhatt family and targeted Alia Bhatt through a series of allegations, Ranvir Shorey had identified himself as their victim. The actor who was then in a relationship with Pooja Bhatt had once recalled his horror and a violent fight with the actress. In fact, if the actor is to believe, the family tried to tarnish his image in the industry and his trauma was so much so that he had to leave the country for a few months. Ranvir Shorey Mocks Nepotism in Bollywood with a Series of Tweets Narrating Inside Stories (Read Tweets).

While he couldn't narrate his side then, today when he's able to, he has opened up about his experiences and accused Mahesh Bhatt and family of isolating him professionally and socially in the industry. But before going through his recent statement, let's have a brief recap into their equation and what exactly went wrong and when.

His Feud with Pooja Bhatt (The Past)

For the ones who don't know, Ranvir dated Pooja for a while. Recalling his ugly spat with his then-girlfriend, the actor in one of his early interactions had said, "Like every day, I was at Pooja's place. The usual scuffle ensued. I decided to call off the relationship. Things got out of hand. I packed my bags and left. When I slid behind the steering wheel of my car, I realised I had forgotten one of my bags. I started calling Pooja on her cell phone (groans). She disconnected my calls. I kept trying to reach her. As I was dialling, I heard the glass shatter around me. I looked back to see that both windows of my car had been broken. I came out and saw Pooja's brother Rahul standing with an iron rod. I was dazed. Before I knew what happened, he started whacking me with the rod."

Recently when Shorey in his interaction with Hindustan Times was asked if he was referring to the Bhatt family in one of his recent tweets, the actor had an affirmative reply to it. "I went through a similar experience where I was professionally and socially isolated, equally pressured from all ends. Every chance and every platform they would get, they (Bhatts) would be lying about me, saying I am an alcoholic and abuser. You feel so helpless and powerless because these people are so powerful that the press will just listen to them and not even bother calling you for your side of the story. You just feel so helpless and frustrated because you can’t do anything about it. It got really toxic for me at the time and I had to leave the country for a while," he said while explaining his ordeal. Ranvir Shorey Says His Twitter Spat With 'Friend' Anurag Kashyap Was a 'Minor Misunderstanding.'

I don’t take any names ‘cause I have no evidence to prove their complicity! But the reason I speak is, I went through the same professional & social isolation, bad mouthing & lies in the press, and psychological trauma from 2003 to 2005 with the same people who are now involved. https://t.co/q0YZs8bHYY

The actor soon returned to the country post his brief exit but he insists his return in Bollywood wasn't welcomed. He tried hard to make a name for himself and he continues to struggle even today. "After I came back, I had to start from scratch. I went back to doing television. I did The Great Indian Comedy Show and from there on, it has been a crawl making my own space as an actor," he said in his same interaction.

While Pooja had earlier decided to react to Kangana's accusations, we wonder if she'll decide to comment on his recent statements.

(The above story first appeared on LatestLY on Jul 27, 2020 05:55 PM IST. For more news and updates on politics, world, sports, entertainment and lifestyle, log on to our website latestly.com).