In November last year it was announced that Arjun Kapoor and Rakul Preet Singh are teaming up for a cross-border rom-com. Directed by Kaashvie Nair, only the last schedule was pending to be shot when the lockdown was announced. 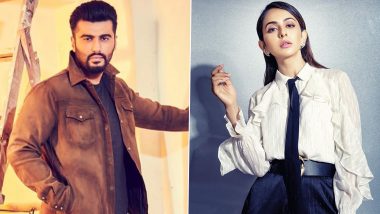 Shooting of films and other shows had to be suspended temporarily in the wake of coronavirus outbreak. Due to the crisis and considering the safety of public, all cinema halls had to be shut down in order to avoid mass gathering. And that led to postponement of several films that were scheduled to be released during the time of summer this year. Regarding the shooting of some films, in a few cases, only the last schedule was pending to be shot and for some others, it was just a matter of few days. Something similar happened in the case of Arjun Kapoor and Rakul Preet Singh’s upcoming rom-com that is yet-to-be-titled. Arjun Kapoor and Rakul Preet Singh to Star in a Family Dramedy Which Will Be Produced by John Abraham.

In November last year it was announced that Arjun Kapoor and Rakul Preet Singh are teaming up for a cross-border rom-com. Directed by Kaashvie Nair, only the last schedule was pending to be shot when the lockdown was announced. Although there are some relaxations being issued, the team of this upcoming project are wondering what could be done as the last leg of the film has to be shot in Europe. Since it is not possible to fly abroad as per the current scenario, the makers are reportedly planning to resume shoot in Mumbai, reports Mid-Day. Rakul Preet Singh on Her Upcoming Rom-Com with Arjun Kapoor; ‘It Is a Story of Characters Who Belong to India and Pakistan’.

Co-producer Madhu Bhojwani was quoted as saying, “Keeping the safety protocols in mind, we will evaluate what can be shot locally. We will first film the indoor portions, and then, take a call on the pending shoot. Even as the restrictions are being lifted in India, we must proceed carefully.” When he was asked if they’re planning to recreate Europe in Mumbai, Bhojwani responded saying, “For now, we are adopting a wait-and-watch mode as several countries are in lockdown.” This upcoming flick will be produced under the banners of Emmay Entertainment and T-Series.

(The above story first appeared on LatestLY on Jun 30, 2020 09:24 AM IST. For more news and updates on politics, world, sports, entertainment and lifestyle, log on to our website latestly.com).