Recently, the actress in a virtual session with Art of Living founder Sri Sri Ravi Shankar revealed why she's tired and disheartened by all the trolling over Ramayan. 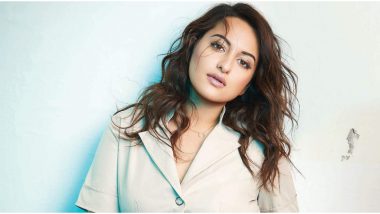 One of social media's bane is that it has given birth to the trolling culture. It has become common for netizens to troll users, celebrities over certain incidents and if you follow Bollywood stars, you probably know about Sonakshi Sinha's Ramayan gaffe on Kaun Banega Crorepati. The actress was poorly trolled across social media platforms for not knowing the answer to a question about the mythological epic and months later, is still targeted over it. Recently, the actress in a virtual session with Art of Living founder Sri Sri Ravi Shankar revealed why she's tired and disheartened by all the trolling over Ramayan. Sonakshi Sinha Becomes Shotgun Jr and Shuts Up Haters Who Quizzed Her On Ramayan During Her AMA Session With Fans.

For the uninitiated, Sonakshi appeared on one of the episodes of the Amitabh Bachchan led quiz show and was asked for whom did Hanuman fetch the Sanjeevani herb. and Sinha had to use a lifeline for it. Recently, as Ramayan was re-telecast on DD National, netizens trolled the Dabangg 3 actress again, asking her to update her knowledge on the same.

During her interactive session with Sri Sri Ravi Shankar, the actress finally opened up on her side of the story. Speaking about the KBC incident, Sonakshi said, "I participated with a contestant named Ruma Devi. A question was asked to us on Sanjeevani Booti, and for a moment, both Ruma and I went blank. Honestly, it was a bit embarrassing, since we have grown up reading and watching Ramayana. But it was really long ago, and we all tend to have moments when we go blank. Since then, it has been five to six months, and it’s disheartening that people still troll me over one honest mistake.”Mukesh Khanna Takes a Sly Dig at Sonakshi Sinha, Says ‘Ramayan and Mahabharat’s Rerun Will Help People Like Her Who Have No Knowledge’.

Every now and then, the actress has called out her trolls and given them some befitting replies. Recently after a netizen tried to mock her on Instagram during her 'Ask Me' session, the actress shut down her troll with a dignified response.

(The above story first appeared on LatestLY on May 07, 2020 03:57 PM IST. For more news and updates on politics, world, sports, entertainment and lifestyle, log on to our website latestly.com).